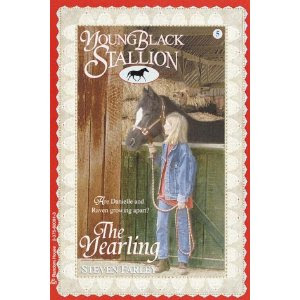 Once again, Danielle must adjust to life without her beloved horse Redman, who’s back on duty at the riding camp. She turns to Raven for comfort, but the brash young colt is more full of himself than ever. Although Alec, Raven’s trainer, is pleased with the development of his future racehorse, Danielle is troubled by Raven’s increasingly aloof manner. Despite her best efforts, he doesn’t seem to care whether she is around or not. Alec reminds Danielle that Raven, like the famous Black, will never be anyone’s pet. Can Danielle give up her secret hope of being the colt’s best friend?

Sadly on this book I have to go back to my former..sadness with the series…*sigh* here we go.

While he has made an appreciated attempt, Steven Farley’s books just do not live up to the caliber of his father’s work (Walter Farley). I have read 6 of the books in the “Young Black Stallion” series, and I find them more akin to the “Thoroughbred” and “PonyPal” books, sadly lacking the fire and excitement of the original Black Stallion books. Steven Farley has made some glaring errors in his protrayal of Alec Ramsey… How could Alec be only 18 if he found the Black at 15? So the Black has only been racing for 3 years through all 21 books in the original series? Come on! Make Alec 25 or so, and that would be believable….

Also, what makes these books less interesting to read is that they are “dumbed down” a bit, while the original stories were written for 10-12 years olds, they appealed to adults too! (Like myself, who grew up reading the Black Stallion books.)

One thought on “Book Review: Young Black Stallion, 5 – The Yearling by Steven Farley”