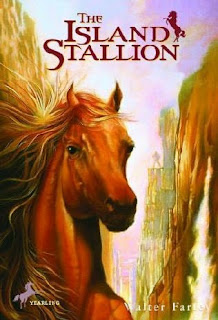 When Steve Duncan is asked to go on an archeological search on a remote Caribbean island, he never imagines the stallion he will find there. But the giant horse is unapproachable, showing nothing but fear and fury towards people. When the stallion gets caught in quicksand, can Steve get close enough to save the wild horse?

Oppsy I thought I posted this one…seems I missed it.

Flame the Island Stallion; he doesn’t get as much attention as his “brother” The Black. But the Island Stallion is a remarkable book, for some it will be something fresh by Walter Farley, since you will be meeting new characters. The book its self is interesting in that half the book takes place on Azul Island, so for the most part the only people we see are Steve Duncan and his friend Pitch. One would think that would make for a boring story, but it doesn’t there is just as much adventure in this book as some of the Black Stallion books. Just like the black stallion it is about a boys love for a wild stallion, a love which in a way tames the stallion. The book is told in a time period of 2 weeks so that is also very different from some of the Black Stallion books. I think most who have enjoyed reading Walter Farley’s The Black Stallion (Books), being there with Alec and the Black. Will enjoy The Island Stallion where they will be there with Steven and Flame. Who wouldn’t want to have a similar adventure like Steve has, finding a lost world that only you and someone else knows about and seeing these incredible beautiful horses, and to top off seeing some ancient artifacts.