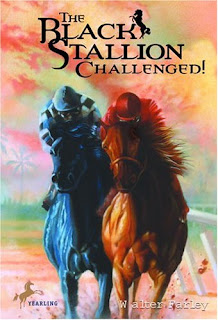 The Black Stallion is the fastest horse in America and he and his jockey, Alec Ramsay, are training for a big race. Suddenly there comes a new challenger: Flame! An unproven racer, the Island Stallion can run like the wind and his jockey, Steve Duncan, knows that Flame will give the Black the race of his life. But what neither Steve nor Alec know, is that these two stallions have met before, and they hate each other.

Alex, who owns the Black, gives Steve advice. Steve is new to the racing world and Alex tries to teach Steve all the little facets of racing that Alex has learned over years of racing the Black. Steve takes some of the advice. This being fiction we have a race between the Black and Flame, the two fastest horses in the world!

Walter Farley does a great job of telling the story. Most of his stories are basically about a big horse race. But each time he tells the story in a different way. We learn about how different jockeys ride, and how different horses approach the track. Some horses are excited and want to race, others are a bit fearful. Walter Farley spent years in the racing world and it shows.

In this story a filly stumbles and fractures one of her forelegs during a race because the jockey was pushing too hard. There is a whole chapter on the operation as the vet works on the leg. There is another chapter about the jockeys getting ready for the big race. Much of this chapter is told from the point of view of the man who runs the scales.

I have enjoyed every Walter Farley story I’ve read. This was no exception. It is well written and well paced. My young neice constantly wanted me to read another chapter. If you have liked any of the other Black Stallion or Flame stories, give The Black Stallion Challenged a try.