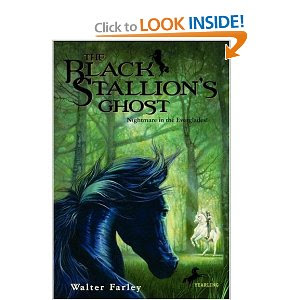 While riding the Black in the Everglades one day, Alec meets a man astride a ghostly gray mare. Alec?s fascination with the man turns to fear as he realizes the man is dangerously close to insanity. Soon Alec and the Black are caught up in a deadly chase through the depths of the Everglades, where a misstep could be fatal.

The Black Stallion, written by Walter Farley, is about a young boy and a stallion called Black. There has been many sequels of The Black Stallion. This book is about a boy named Alec and his adventure with his horse. Alec went to see a circus with a ringmaster and a horse who is like a ghost. Alec was riding Black through the fog-shrouded Everglades and they came upon a man on a gray mare that turns out to be the Ghost. They met eachother and the captain invited Alec to his house. Alec has a feeling that his host is insane. They had lunch together and Alec was about to go home when the captain begged him to stay for the night because a storm would be coming soon. It turned out that the captain wanted to breed his horse with Black. When Black was getting close with the Ghost, the captain tried to keep him away and got a pitch-fork to defend his horse. The next thing that happened was Black was running off towards the Everglades. Alec who was knocked out woke up and found that Black was gone. He tried to run after him, but the captain wouldn’t let him because it was dangerous. Alec begged the captain to go with him because it was his fault that Black ran off. The captain was afraid of the Haitian curse. After a long search, the captain was found dead by Alec. Alec eventually found the Black. He rode back to the captain’s place and found the people from the place he was supposed to stay at. They were very worried about Alec and took him and Black back. Alec told them the story, but they said that the captain had died a long time ago. They found out that the blind man had sold the Ghost to a man. Alec had wanted to buy that horse so that he could breed the Ghost and Black. They found the man who had the Ghost and Alec said he would buy it for any amount of money. The man said the horse was not on sale, but Alec eventually bought the horse for a large amount of money.
I like the book because it is an adventurous story about a horse and a loving boy. One of my favorite quotes is, “It’s too late for regret. I MUST find him.” It showed how much Alec had love for Black. Alec had lived with Black since his childhood and had loved and cared for it although the horse was a wild and fierce one that no one could go near him but himself. Another quote that I like was, “Come on. We’re getting out of here.” This quote meant that Alec was getting out of the Everglades with Black together without any of them getting left behind.
My favorite part of the book was when Alec and the captain went to find Black. Alec had the courage to go when the captain didn’t. I liked this part because Alec wouldn’t give up finding Black and that showed how much he cared for it.