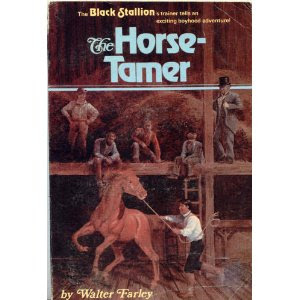 While waiting for a delayed airplane, old Henry Dailey, the Black’s trainer, tells young Alec Ramsay a story of his own youth, travelling with his brother, Bill. Bill Dailey’s talent as a horse-whisperer was unmatched in the days before the automobile and young Henry tells of an unscrupulous con-man who mistreats horses into behaving temporarily. Bill is determined to show that the man is a fraud, but can he unmask the con without getting hurt?

Walter Farley experimented with many genres of writing and here, in his only foray into historical fiction, he weaves a fascinating tale of life when horses were the primary means of transportation.

Simply put, The Horse Tamer is an account of Henry Daily’s younger days, working with his older brother for a cirus. As the title denotes, Henry tames wild horses, instead of breaking them. Along with an insight into Henry’s past, the book also provides excitement as it reveals a sinister plot unfolding. The Horse Tamer was a good book; while not GREAT, it still offered excitement and made me keep turning the pages. I liked this book because it was written by Walter Farley, and I like his stuff. Also, the plot was interesting, and it gave me a background on Henry Daily. It was also a fresh change of pace from all the books about Alec Ramsey. Overall, I’d say read it. Although it’s not Walter Farley’s best book ever, it’s still good enough to warrant a reading.