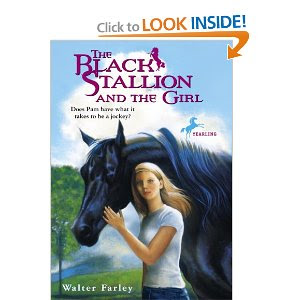 Hopeful Farm’s success has greatly increased Alec and Henry’s workload. After firing an employee for kicking a yearling, Alec takes out an advertisement in a racing magazine. When Pam Athena applies for the job, Alec has a hard time persuading his partners to retain her as a trainer and even harder time convincing them to let her ride the Black Stallion when Alec is suspended as a jockey.

This is about Alec falling in love with a girl who applies for a job at Hopeful farm. Though those close to Alec don’t think a girl should be involved in horse racing, he wants her to stay and she does. Pam (the girl) shows Alec what its like to be young though they are close in age Alec feels years older. Pam rides for the fun of riding. Alec has forgotten that since its become a business riding. Pam even works magic with Black Sand,The Black’s grandson, Satan’s son. In the end though Pam loves Alec and wants to one day marry him being young she still wants to see stuff and grow up. They promise to stay in touch, and even though Alec misses her he never forgets what she taught him.

Oddly in this book Pam rides The Black in a race. I’m pretty sure in most of the other books it’s always been said that Alec is the only one the Black allows to ride him with expectation to the Black’s original owner Abu Ben Ishak. There was even talk from Henry on putting another Jockey up on the Black if Pam couldn’t handle him.

This was a good book, Pam and Alec’s relationship was sweet. The character of Pam was great too she just had a spark to her and she kind of reminded me of Alec in the first few books, how she would talk softly and just say anything to calm a horse down