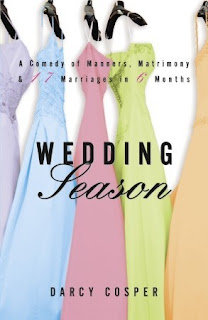 Seventeen weddings. Six months. Only the strong survive. Joy Silverman and her boyfriend, Gabriel Winslow, seem perfect for each other. Living together in New York City, they have everything they want and everything in common–most important, that neither one wants to get married. Ever. But when Joy finds herself obligated to attend seventeen weddings in six months (including those of her father, mother, younger brother, and five of her closest girlfriends), the couple is forced to take a new look at why they’re so opposed to marriage when the rest of the world can’t wait to walk down the aisle. As the season heats up and the pressure mounts, Joy must confront what it means — and what it costs — to be true to one’s self. A witty, wicked comedy of manners in the satirical tradition of Jane Austen and Evelyn Waugh, Wedding Season is an intelligent, laugh-out-loud funny examination of friendship, faith, integrity, and the ideas and institutions that bind us together, shape our lives, and define who we are. “If Jane Austen and Candace Bushnell were to meet for a long drink in a downtown bar, the delightful result might be a contemporary comedy of manners with a decidedly old-fashioned feel. Darcy Cosper has given us just that: a sweet and sharply funny concoction that will have bridesmaids everywhere nodding their heads in recognition.” — Dani Shapiro, author of Family History “Wonderful….Wedding Season is social comedy on a grand scale. A hilarious and urbane primer on getting hitched-or not-in the twenty-first century.” — Gary Shteyngart, author of The Russian Debutante’s Handbook.

I’m sorry, but when a book is titled “Wedding Season” and the cover art is of a row of pastel colored bridesmaid dresses, it has one purpose in life – to be a bit of brainless fluff with a happy ending for me to read when I’m sick. I guess I should admire it for trying to be more than what it is, but it didn’t really succeed, and I was just annoyed that it didn’t know its place. It was nice to read some chick lit with a protagonist who wasn’t obsessed with getting married, and I was glad that it didn’t just end with her changing her mind and drinking the Kool-Aid (nothing against marriage, in fact I wouldn’t mind getting married myself someday, but it shouldn’t be a requirement in modern society), but the conclusion she drew about marriage in the end was just baffling and unsatisfying