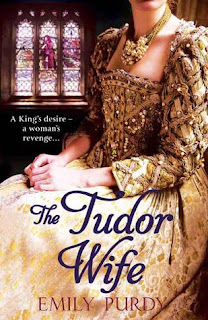 Shy, plain Lady Jane Parker feels out of place in Henry VIII’s courtly world of glamour and intrigue–until she meets the handsome George Boleyn. Overjoyed when her father arranges their marriage, her joy is abruptly cut short when she meets Anne… George Boleyn is completely devoted to his sister; and as Anne’s circle of admirers grows, so does Jane’s resentment. Becoming Henry’s queen makes Anne the most powerful woman in England; but it also makes her vulnerable, as the King is desperate for an heir. When he begins to tire of his mercurial wife, the stage is set for the ultimate betrayal. Encompassing the reigns of four of Henry’s wives, from the doomed Anne to the reckless Katherine Howard, THE TUDOR WIFE is an unforgettable story of ambition and jealousy, combining the sumptuous historical detail of Philippa Gregory’s novels with the lust and authenticity of the hugely successful TV series THE TUDORS.

Now despite what the description says this is not the most historically accurate book. However I never go into a historical fiction thinking that I am reading a reference book so I can sit back and enjoy. The Tudor wife was a fantastic read for me. It looked into the Tudor court from another point of view. Most of the books I read about the topic center on King Henry (to be expected of course) but I like hearing about the events from other points of view. Jane is often shown and played as a viper and a bit of a vicious woman. This book is no exception she does many things badly and wrong. However look at the situations she was placed into. Can any of us really say we would have done different than she did? I am not sure I could. If you like reading about the Tudor’s and love a good historical fiction that has twists, turns and drama this is going to be a great read for you.