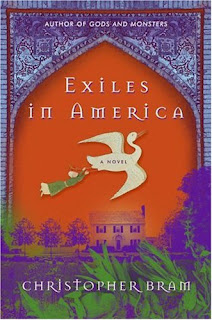 Zack Knowles and Daniel Wexler have been together for twenty-one years. Zack is a psychiatrist, Daniel an art teacher at a college in Virginia. In the fall of 2002, a few months before the Iraq War, a new artist in residence, Abbas Rohani, arrives with his Russian wife, Elena, and their two children.

But Abbas is not quite what he seems, and soon he and Daniel begin an affair. After love throws the two families together, politics threatens the future of both in ways no one could have predicted.
A novel that explores how the personal becomes political, “Exiles in America” offers an intimate look at the meaning of marriage, gay and straight, and demonstrates the breathtaking skill and daring imagination that have garnered Christopher Bram widespread critical acclaim.

That Christopher Bram is one of our finer novelists today is a given (The Notorious Dr. August: His Real Life and Crimes, Gods and Monsters, Life of the Circus Animals, In Memory of Angel Clare, etc). EXILES IN AMERICA is a very astutely constructed novel, one that explores the concept of displaced persons, whether those persons be gay men in a straight homophobic town, artists in a world of grounded minds, immigrant visitors in the land of the free, or Muslims in a path of fear guarded closely by the Christian ethic. Mix these possible people in a country post 9/11 and prior to America’s (read Bush’s) declaration of war on Iraq and there is a story brooding.

For the most part Bram finely tunes this novel with well-drawn characterizations, a gift he continues to elucidate in his writing. But something has entered Bram’s writing mind that is a bit disturbing: he seems to have lost some of the respect for his readers that has never happened prior to his novel. There are moments of ‘dumbing down’ the reader by excessive explanations of obvious knowns and even stumbling at the close of the book to speak not in the voice of the characters he has created but in his own vacillating voice as a writer – a section of this otherwise fairly tense read that breaks the magic and adds little.

Daniel, an artist with painter’s block who now only teaches art in Williamsburg, VA, and Zack, a psychiatrist who has given up his New York practice to follow Daniel to his present college teaching position, have been together as a couple for twenty one years, the last ten years at least of which have been an ‘open marriage’: both men are agreed that transient liaisons outside of their marriage are acceptable as long as they talk about them. Daniel, though in his late forties, has fears of aging and continues to pursue flings, while Zack has settled into a nearly asexual state. Into their milieu come a new guest faculty artist, Iranian Abbas and his Russian wife Elena (a couple with two children who also have an open marriage), and soon enough Daniel and Abbas are lusting after each other in what continues long enough to become an affair. The story is centered on how these four people react not only to each others’ needs and fears, but how Zack and Daniel become enmeshed in the growing American suspicion of Middle Eastern ‘potential terrorists’, a factor surfacing when Abbas’ older brother Hassan arrives from Tehran insisting that Abbas, Elena and their children return to Iran because of the incipient war between the US and Iraq. These conflicts focus the instabilities and consequences of the lifestyles of the four friends and introduces an entirely new attitude to Exiles in all its meanings.

Bram writes brilliantly and moves his story at a terrific pace: EXILES IN AMERICA is a difficult book to put down once started. For this reader the only problem other than the ones mentioned above is the lack of charisma: it is difficult to truly care about any of the people in this book. But perhaps that is another ‘alienation’ Bram wants to introduce – a metaphor for the isolation among people that has been heightened by the current preoccupation with distrust of intimacy and people outside our individual realm. Bram poses questions, delivers the goods, and once again proves that he can create a fine story based on a tough theme.