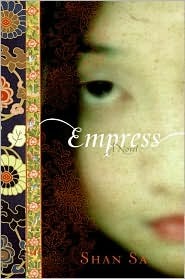 A ravishing historical novel of one of China’s most controversial historical figures: its first and only female emperor, Empress Wu, who emerged in the Tang Dynasty and ushered in a golden age. In seventh-century China, during the great Tang dynasty, a young girl from the humble Wu clan entered the imperial gynaecium, which housed ten thousand concubines. Inside the Forbidden City, she witnessed seductions, plots, murders, and brazen acts of treason. Propelled by a shrewd intelligence, an extraordinary persistence, and a friendship with the imperial heir, she rose through the ranks to become the first Empress of China. On the one hand, she was a political mastermind who quelled insurrections, eased famine, and opened wide the routes of international trade. On the other, she was a passionate patron of the arts who brought Chinese civilization to unsurpassed heights of knowledge, beauty, and sophistication.
And yet, from the moment of her death to the present day, her name has been sullied, her story distorted, and her memoirs obliterated by men taking vengeance on a women who dared become Emperor. For the first time in thirteen centuries, Empress Wu flings open the gates of her Forbidden City and tells her own astonishing tale-revealing a fascinating, complex figure who in many ways remains modern to this day.

Empress has regal flowing prose and is beautifully written. Unfortunately, the content is anything but beautiful; and the main character, a woman known as Empress Wu, who became the first (and, I believe, only, female emperor in China), metamorphoses from a caterpillar that flaunts the strict female conventions of her time, to a twisted and malicious butterfly with a stinger of pure, lethal venom.

At first, I really liked this book a lot. But then, as Ms. Sa got into the court intrigues, I began to be repulsed. Debauchery runs amok. Torture is the penalty for disloyalty or even disfavor; the emperor keeps a harem full of conniving women who want to be the first to bear the son that will carry on the legacy; Empress Wu, also known as Heavenlight, consorts with several women including her sister (which leads to an extremely disturbing and incestuous subplot that very nearly turned me off the book completely); and it’s basically just one big, royal mess. I couldn’t finish it to the end. I tried, but by page 213 I no longer had any vestiges of respect or liking for the main character.

Now, I’m not sure how historically accurate this book is, but I suspect it could be very close to the truth because court intrigue tends to be one of those things that are stranger than fiction. In fact, reading about this particular group of Chinese royalty reminded me of the Tudor court and the viper’s nest that it was — and who could forget the lovely Borgia family. Anyone? So people who don’t like their histories packaged up prettily and tied with string that bears the subtle hint of nationalism might really like this book. I’m generally in that camp, but the incest and violence and sheer cold-blooded cunning made it a little too difficult to swallow.

If there is anything good to be gained from this book, it is that it really makes you appreciate how far China — and the world, in general — has come with regard to the rights of man, equality between the sexes, and simple human compassion. I certainly wouldn’t have wanted to be a woman in 600 A.D. — not in China, nor anywhere else for that matter. It’s certainly nice to know that I can go about my daily business without being considered chattel!