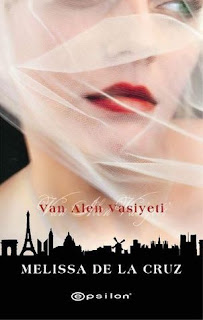 With the stunning revelation surrounding Bliss’s true identity comes the growing threat of the sinister Silver Bloods. Once left to live the glamorous life in New York City, the Blue Bloods now find themselves in an epic battle for survival. Not to worry; love is still in the air for the young vampires of the Upper East Side. Or is it? Schuyler has made her choice. She has forsaken Jack for Oliver, choosing human over vampire. But old loves die hard…. And even coldhearted Mimi seems to suffer from the ties that bind.

Book four in the Blue Blood series of books does not disappoint. By this time we are fully lost in the world of the Blue Bloods, the special vampires that are really fallen Angels. I am still taken by the premise that Melissa de La Cruz has gone on for this series and the web that is being weaved draws me deeper in.
It has been over a year since Rio and Schuyler and Oliver have been on the run nearly as long. It would seem as though she has made her choice, but just as she makes a daring move to secure her and Oliver’s safety, she is thrown into the very thing she fears the most and into the arms of the one she can hardly bare to live without. Being her mother’s uncorrupted daughter has made Schuyler the Blue Bloods last hope, but despite the fact that she has embraced her task, she has managed to run from the biggest similarity that she and her mother share, until now. Is her mother right? Are there some loves worth dying for?

Bliss has been in a lost state, struggling just to remember her name. She can’t account for over a year of her life, and there is a Visitor living inside her, taking over whenever he pleases. As Bliss fights to regain control of her mind, body and future, she uncovers the truth of who she is and in the process uncovers a scheme that could undo everyone and everything she has left, but how do you fight something that lives in you? Will she be strong enough to stop the Visitor, before it’s too late?

Mimi has traipsed a crossed the globe, searching for the watcher with her venator team, led by the very one who nearly caused her death, Kingsley Martin. But every time they think they’ve finally caught up, they are left wanting. Is it the year of adventure and near death experiences that has caused Mimi to reevaluate her life, or has she only just found someone that allows her to be as she truly is? Is it just meaningless nothing, an impulse of this life, of this time, or has Kingsley been there, every cycle, pushing her and possibly loving her and worse, her loving him back?

I’m not going to reveal anymore, it would spoil the fun. Once again I was swept away in this complex world, with its vibrant characters, spot on dialog, and nerve wracking plot.