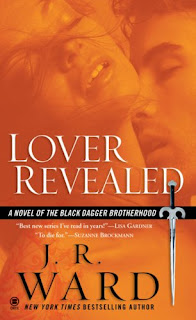 Butch O’Neal is a fighter by nature. A hard-living ex-homicide cop, he’s the only human ever to be allowed in the inner circle of the Black Dagger Brotherhood. And he wants to go even deeper into the vampire world-to engage in the turf war with the lessers. His heart belongs to a female vampire, Marissa, an aristocratic beauty who’s way out of his league. And if he can’t have her, then at least he can fight side by side with the Brothers. But fate curses him with the very thing he wants. When Butch sacrifices himself to save a civilian vampire from the slayers, he falls prey to the darkest force in the war. Left for dead, he’s found by a miracle, and the Brotherhood calls on Marissa to bring him back, though even her love may not be enough to save him.

Butch was not a character I took to right away in the other Black Dagger Brotherhood novels. So when it came time to read his book in the series I will admit I was thinking just to plow through the book and try not to think too much about it. I regret that choice and I regret thinking less of Butch O’Neil. Once again J.R Ward has brought her delicious writing style with her blend of sensual seduction and fast moving action into Lover Revealed. J.R Ward lets us delve more into the back story of Butch why he has been a bit of a drunkard in the past but we than also find out what he has been thinking now.

If you have read the other books you know that he has been living with the Brotherhood. By Lover Revealed he has started to want to get out from under the living situation. It is not because he feels any less loyal to the Brothers, but he wants to feel like his own man. Anyone can understand that right? There is of course the tension still remaining between him and Wraths Ex Mate Marissa.

While I enjoyed the book there are still a few parts that get to me I am still not a fan at all of the “slayers”. The pieces with the slayers are not written badly they are just as good as any other bits it is simply the slayers are annoying and you wish their baby powder smelling selves should just go away. That said there is one interesting bit that crops up and blends well with the entire story having to do with the slayers. So if you enjoy the Black Dagger Brotherhood series you will enjoy Lover Revealed.