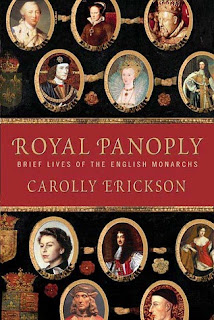 From medieval conqueror to Renaissance autocrat to Victorian Empress to modern melodrama, Royal Panoply is the story of some of the most fascinating people in world history. With her trademark blend of probing scholarship, lively prose, and psychological insight, Carolly Erickson focuses on each monarch’s entire life—from the puny, socially awkward Charles I, to the choleric, violent William the Conqueror, to the well-meaning, deeply affectionate Queen Anne, who was so heavy she had to be carried to her coronation. Royal Panoply recaptures the event-filled, often dangerous, always engaging lives of England’s kings and queens, set against the backdrop of a thousand years of Britain’s past

Glimpses of the lives of each of the British monarchs from William the Conqueror to Elizabeth II. A great book for getting a basic idea of the highlights of each reign and popularly held opinions regarding each monarch and his/her life plus a few less well-known tidbits (to me) (little facts like when George I came to rule England all the general public knew of him was that he was a German general who had locked his beautiful wife in a tower for twenty years and killed her lover after he discovered evidence of an adulterous affair).

There are times however, when I felt that Erickson oversimplified some of the individuals or took a stand on an event or a personality without substantiating it (you know, statements like: Pomp and Circumstance IV loathed High and Mighty for his superior graces and popularity with the people). Just a little evidence or an allusion to evidence would have made it a much more authoritative work for me. That said, I still enjoyed the book. Hey, and now I can recite the British royal line all the way from William the Conqueror to Elizabeth II! (Won’t that be useful for winding up parties?!):0)