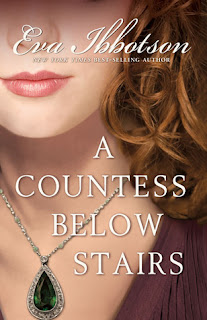 After the Russian revolution turns her world topsy-turvy, Anna, a young Russian Countess, has no choice but to flee to England. Penniless, Anna hides her aristocratic background and takes a job as servant in the household of the esteemed Westerholme family, armed only with an outdated housekeeping manual and sheer determination. Desperate to keep her past a secret, Anna is nearly overwhelmed by her new duties—not to mention her instant attraction to Rupert, the handsome Earl of Westerholme. To make matters worse, Rupert appears to be falling for her as well. As their attraction grows stronger, Anna finds it more and more difficult to keep her most dearly held secrets from unraveling. And then there’s the small matter of Rupert’s beautiful and nasty fiancée..

I am emotionally winded by this book in the best possible way! Whether it’s the time of year and the bitter winter snow outside that made this book hit the spot the way it did I’m not certain.

But the poetic language, the sheer romanticism, the wit, the Shakespearean farce element, the astute social, historical, cultural, sexual, racial and class observations were all perfectly balanced to create one of the most richly feel-good romances I’ve read in years.

I’ve always admired Eva Ibbotson for hitting that intimate personal note in her stories, even the lighter childrens’ books like Which Witch?. But in this book which is for young adults she’s created a masterpiece of evocative storytelling combined with painfully accurate social dynamics which made me weep several times. I saw Ollie’s cruel heartbreak coming a mile off and was crying in sympathy in advance!

I shed tears for Rupert’s war-trauma and Uncle Sid’s elderly wandering eye. It’s very, very obvious from the get-go that the end is wreathed in a halo of golden roses, so the fun lies in finding out how the star-crossed lovers get each other. The strength here, as with most of Ibbotson’s work, lies in a beautifully worked out supporting cast of fantastic characters: Mr. Proom and his batty mother, the Herrings, The Honourable Olive, Baskerville the boarhound, Minna, James, the Scottish Gardener, Pinny…the list goes on. We get just enough background and depth from the author to really get a feel for who all these people are. For instance, Proom the butler isn’t just the sum of his one-liners, as is so often the case with side characters of that kind. In fact, he’s one of the real heroes of the tale.

The one slight hiccup is Anna herself, though even she isn’t entirely stereotypical as the huge-hearted heroine. But she is such a very radiantly good girl, so beatific, going so far as to describe someone thinking about her using the phrase ‘her votive hands’, that it’s almost impossible to live her struggles with her. Things will be all right almost by default around Anna, so that her anguish, her trouble, her heartache become less powerful than the colour palette of her joys, quirks and generosity.

Having said that, one of the more clever ideas in this book is that she isn’t really so very secret. Everyone around her recognizes her genteel birth in her manner, turn of phrase, bearing, appreciation of art and music and education. They decide to humour her for her own sake and play along in her presenting herself as a housemaid. Her curtsies had me in stitches, it was so vivid. And luckily she isn’t so unreal as to not feel sympathy for her. She has a personality of Sarah Bernhardt like proportions: Sensuous, generous and with great dramatic flair, but her heart’s in the right place. Just that tiny little bit too Holy, you know? But she is the mulch that the other characters thrive on and for that, she has to be the way she is.

The other aspect that makes this book more than just a throwaway romance are the racism and Ubermensch theories two of the characters so passionately flaunt, with the utter conviction of their being right. Set as the story is between two World Wars, it is an intelligently shuddersome foreshadowing of the drive behind the eugenics theories of the Nazi’s. Which, let’s face it, isn’t exactly standard fare for an otherwise beautifully frothy upstairs/downstairs love story. And the sexuality is a wonderfully matter of fact part of the narrative; again, to tackle, among other things, the sexual feelings of an elderly person so sensitively is clever and moving. Are we really so uptight that we need to ignore that elderly folk feel lustful, too?

I agree with Sid’s bottom-pinching being harmless, because nothing else is made available to someone like him: Elderly people are to become sexless when they reach a certain age and I find this objectionable. Ibbotson makes a point of mentioning that Sid never had anything but willing partners and if the maids are able to laugh off a bit of a grope, why can’t we? In fact, their understanding was very touching, I thought.

The writing itself is delightfully poetic and drips with atmospheric descriptions, be it of food, dress, gardens or rooms. An instant all time favourite which left me with the most perfect Christmas feeling!