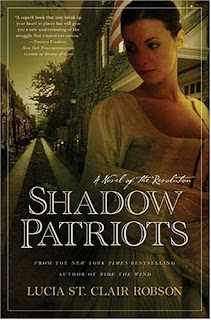 In July of 1776, the American colonies are ablaze with passion. In the streets, those who would be free boldly read aloud the newly written Declaration of Independence. It is a cry of freedom, but it is also a time of critical confrontation, both on the battlefield and off as the people of a new nation choose between their king and an uncertain future.

It is a choice which is not easily made. As Commander-in-chief George Washington declares a major victory in New York, the rest of the colonies separate into Patriots and Tories. Kate Darby never expected to be swept up in this political storm. The Darbys are Quakers who have pledged their allegiance to God first–but that soon changes. Kate’s younger brother, Seth, can no longer deny his soul’s cry against tyranny. Fleeing from his Loyalist parents’ house to join General Washington’s ragtag forces, Seth enters a life he never expected.
With the influx of British soldiers, Philadelphia soon becomes a temporary base camp for the English forces. When the Darbys find themselves forced to take in Major Jonathan Andre, Kate falls quickly for his charm.

Despite her warring affections, Kate finds herself drawn deep into the war. As she attempts to follow her brother, she risks her life and her family’s reputation by becoming a spy for the patriot forces, a role which quickly transforms the once-timid Quaker girl. With a world of danger and political upheaval thrown before them, Kate and Seth face incredible danger in the hopes of shaping one of the single most important events in American history: the war for freedom.

Told with historical accuracy and incredible attention to period detail, Shadow Patriots recreates America at its youngest and describes with vivid intensity the men and women who bravely did their part to deliver it from tyranny.

I had high hopes for this book. It is from one of my favorite Era’s in history, and the description looked good. Sadly my hopes for this one fell as flat as a dull thud when one drops a book on the floor. The first Chapter was good, and fun it showed us a look between Alexander Hamilton and George Washington, which is something I don’t think anyone can muck up. But sadly the tone did not stick.

The rest of the book seems to drag by at a confusing pace; it jumps from one city to the next without giving any real flow of what we are doing or how we got there. It follows the solider and than the normal people without giving us a good sense of why or how we are switching views. And perhaps the thing that bothersome the most is that it switches from using thee and thy and back to talking with a modern tone. In my opinion if you’re going to talk in one fashion stick with it. Do not jump around; it is too choppy for the reader. As much as I love the era, this book was very difficult to finish I almost didn’t.

I also take offense to some of the points used that were considered historical, they had way to much license taken with them. For the most part the historical body of this book was on point, but it took some very serious and sudden sweeping points that were also not on point at all. If I was asked if I would recommend this book, I have to say sadly that I would not.