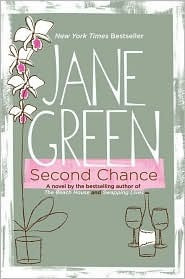 With this life-affirming tale of friendship and fate, Jane Green once again shows why she is a nationally bestselling author with legions of loyal fans. The story of a group of people who havent seen each other since they were best friends in school, they reunite when one of them dies in a terrible tragedy. Recapturing the intimacy of their younger days, they are each surprised at the impact their encounter brings. Warm, witty, and as wise as ever, Second Chance will strike a chord with anyone who is still trying to figure life out.

I’m not sure what happened to Jane Green’s writing craft in this book; the POV jumps wildly in and out of various character’s heads, sometimes in the same sentence. The tense shifts from present to past and back. I suppose the effect is supposed to be one of sitting over a cup of tea with a good friend and having a gossip about other good friends. Only problem is, the book doesn’t come with tea. The story is Green’s version of The Big Chill – a man dies (and why Green chose to make it a terrorist attack on US soil is beyond me; the means of death is very tangential to the story and a car accident would have served the exact same purpose) and his death serves as the impetus for his old school friends, who haven’t really seen each other in twenty years, to gather together. They are your usual collection of stereotypes in reunion stories: the woman trapped in a loveless marriage; the happily married couple who can’t conceive; the mousy one; the glamorous, alcoholic film star. No new ground is broken, although the familiar old tropes are trod on over and over. Still, like all familiar things, there is comfort in visiting and Green’s characters, if not highly original, are engaging