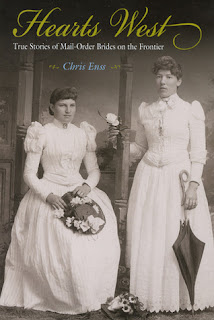 Complete with actual advertisements from both women seeking husbands and males seeking brides, “Hearts West includes twelve stories of courageous mail order brides and their exploits. Some were fortunate enough to marry good men and live happily ever after; still others found themselves in desperate situations that robbed them of their youth and sometimes their lives. Desperate to strike it rich during the Gold Rush, men sacrificed many creature comforts. Only after they arrived did some of them realize how much they missed female companionship. One way for men living on the frontier to meet women was through subscriptions to heart-and-hand clubs. The men received newspapers with information, and sometimes photographs, about women, with whom they corresponded. Eventually, a man might convince a woman to join him in the West, and in matrimony. Social status, political connections, money, companionship, or security were often considered more than love in these arrangements.

This book was not only a fast read but a fantastic read. It brings you inside a time in America where it was acceptable to be a “mail order” bride. When people braved the American west and headed out to settle there was one very clear thing, there was far more Men then Women. The gentler sex was needed for so many reasons, to make families, to help with the homes and just to bring that little something that Women have about them. Chris Enss captures this nearly forgotten practice in gripping detail telling the stories of some of those who placed the ads and some who answered. Sometimes it worked out, and sometimes it didn’t after all nothing is ever 100% right? If you would like a true look into the way many relationships were formed at a time in history when Women were a “commodity”, but most willingly put themselves out there you really need to take a look at Hearts West. In this book you will also find those who were out to make money on the need for women to be in one place, some had hearts in the right place and some did not. There are some amusing scenes painted of throngs of Men awaiting a boat load of women that they can claim for wives, and what should appear on the gangplank of the boat? One, two maybe three women! Not what you would call a bounty of Ladies coming to the hard country! But the picture is amusing, and many of the stories do end in happy love matches, all from answering a simple ad in the paper. If your interested in true history and would like a book that will not only give you that but something to laugh, and cry about. I do recommend you read Hearts West by Chris Enss, my only complaint about this book is that I wish it was longer.