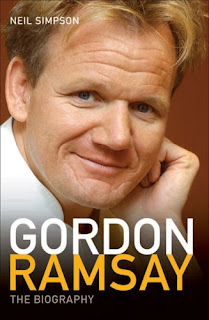 He has cooked for prime ministers, ousted Hollywood actresses from his restaurants, set records for cursing on television, and changed the way Britain eats. As famous for his volatile persona as he is for his cooking, Gordon Ramsay remains London’s most talked-about chef, an international sensation whose eponymous restaurant boasts three Michelin stars. And with his hit television show, Hell’s Kitchen, Ramsay is now a household name in the U.S. At 18, Ramsay was a professional soccer player; at 30, he was a multi-millionaire. So how did he end up in the kitchen? In this, the first biography of the star chef, Neil Simpson offers a fresh perspective on one of the most driven and successful men in Britain.

I love Gordon Ramsay, I love watching his shows Hell’s Kitchen and Kitchen Nightmares. So picking up this book and reading a little bit more about the man and the chef was something I was looking forward too. Moreover, I was not to be disappointed. It was a fantastic read and it is one I would happily pick up and re-read. If you enjoy the Chef and want to know some more information about him and not just that, he shouts in the kitchen I recommend picking up this book and giving it a read.