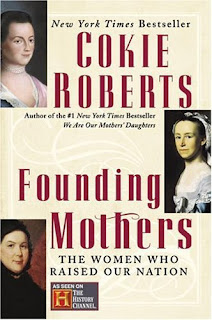 In the histories of the American Revolution, much has been written about America’s founding fathers, those brave men who signed the Declaration of Independence, battled the British, and framed the Constitution. Yet the wives, mothers, sisters, and daughters who supported, encouraged, and even advised them have been virtually ignored.

In Founding Mothers, New York Times bestselling author Cokie Roberts brings to light the stories of the women who fought the Revolution as valiantly as the men, sometimes even defending their very doorsteps from British occupation. While the men went off to war or to Congress, the women managed their husbands’ businesses, ran the farms, and raised their children. These women who sacrificed for the fledgling nation spent months or even years apart from their husbands, at a time when letters were their only form of contact.

Drawing upon personal correspondence and private journals, Founding Mothers brings to life the everyday trials, extraordinary triumphs, and often surprising stories of Abigail Adams, Mercy Otis Warren, Deborah Reed Franklin, Eliza Pinckney, Martha Washington, and other patriotic and passionate women, each of whom played a role in raising our nation.

Founding Mother’s is a fantastic novel, I am a revolution fanatic and like anyone who is, I of course love our founding Father. However, Founding Mother’s takes a look at the unsung and forgotten helpers of the revolution, the women of the Fathers. Behind every, man is a fantastic woman. Think about it for a moment John Adams spent well really most of his marriage away from his wife. We know how things went between them through letters. Abigail Adams was a bit of a saint if you ask me. She ran the farm, raised the children and still managed to support the cause. With her and the women league, she made Salt Peter and any number of other things.

Martha Washington was lovingly called Lady Washington by the men of the army. She made shirts did what she could with supplies. She risked her own life to see and talk to the men of the continental army. Mostly she wished for some time with her husband, but she also had a sense of duty a sense of what needed to be done. She cared about the men in her husband’s army; she looked at them like her sons. She held their hands and she looked forward to seeing them all the time.

There are many more women who helped the cause. Some of them are not even in this book. In addition, all of them are enjoyable, all of them you will enjoy. There needs to be more books like this, more books that sing the praises of the women of the revolution.