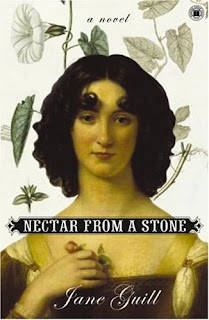 It is 1351 in Wales, a country subjugated by England, beaten down by superstition, war, and illness. Elise, prone to strange visions and the sole survivor of a plague-ravaged family, has fled her village for distant Conwy with her servant Annora, running from a murder she was forced to commit in self-defense.

On the road, they cross paths with Gwydion, a moody Welshman seeking to avenge his murdered family and reclaim his estate, and are drawn into a bloody confrontation with another traveler. In its aftermath, Elise and Gwydion find themselves shocked by their developing feelings for each other, and they part.

As the women ultimately reach Conwy, a menacing shadow from Elise’s past creeps toward her, and she must face it to find the peace she longs for, and help Gwydion recapture his home, and her heart, in the process.

In a dazzling narrative where mysterious visions, powerful desire, and dark secrets from the past converge, Jane Guill spins a masterful tale of romance, revelation, and breathtaking suspense.

Luckily, I was not disappointed sorely. The book did start a little bit slow; some of the establishing pieces in my opinion took to long to do. However, after the first several chapters the book did pick up. The back promises love and romance and revelation as well as suspense and you do get all of these items once you are passed the initial report.

You do get all the things the book promises, although for the genre the romance is a little over done in my humble opinion. Nevertheless, over all I do recommend this book if you like historical fiction and adventures.

One thought on “Book Review: Nectar from a Stone by”