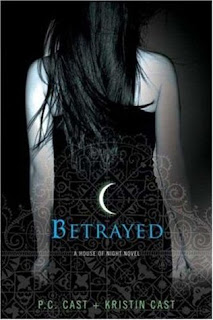 Fledgling vampyre Zoey Redbird has managed to settle in at the House of Night. She’s come to terms with the vast powers the vampyre goddess, Nyx, has given her, and is getting a handle on being the new Leader of the Dark Daughters. Best of all, Zoey finally feels like she belongs–like she really fits in. She actually has a boyfriend …or two. Then the unthinkable happens: Human teenagers are being killed, and all the evidence points to the House of Night. While danger stalks the humans from Zoey’’s old life, she begins to realize that the very powers that make her so unique might also threaten those she loves. Then, when she needs her new friends the most, death strikes the House of Night, and Zoey must find the courage to face a betrayal that could break her heart, her soul, and jeopardize the very fabric of her world.

Betrayed is the second thrilling book in The House of Night Series. I was hopelessly hooked on this series by the end of Marked, but Betrayed has only served to pull me into the series even more. We join up with Zoey and her friends again a month after we last left her in Marked. She has settled into her school nicely, and is now fretting about the other issues that seem to follow her around wherever she goes. The biggest one seems to be boy troubles.

Zoey Redbird who was so worried about fitting in at her new school has more boys than she can handle. I can’t help but laugh a little bit, because on top of the usual Teenage Hormones poor Zoey also has to deal with the hormone changes that happen when you’re a Vampyre. It would seem (and this goes with other books as well) they are very Sexual creatures, and much of that drive is connected to their blood lust and drinking. So poor Zoey finds herself Imprinted with her ex Heath, very loving towards her current Beau the handsome and talented Erik Night, and a teacher Loren Blake the talented vampire Laurent. Oh my!

As if that wasn’t bad enough Zoey will face trials like she hasn’t before, she looses a good friend, and somebody is killing are teenagers. The killings to crop up and play a bit of a part of the story line, but over all they are background to Zoeys loss, as well as her trials with the boys in her life and of course changing the Dark Daughters. The final blow to poor Zoey comes when someone she looks up to and nearly worships becomes something else. From light to dark. It is a powerful blow, but Zoey and her Goddess given gifts find away to keep going.

Betrayed is an emotionally charged read and I found myself crying as I read it. But I also could not put the book down as it was so good. Some of the themes are a little more adult than I would expect for a young adult novel, but nothing to over the top. Just beware you should probably pre read it before you let your young adult read it. It is a great second book in the series.