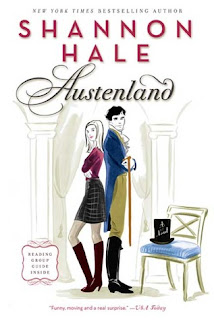 Jane is a young New York woman who can never seem to find the right man—perhaps because of her secret obsession with Mr. Darcy, as played by Colin Firth in the BBC adaptation of Pride and Prejudice. When a wealthy relative bequeaths her a trip to an English resort catering to Austen-obsessed women, however, Jane’s fantasies of meeting the perfect Regency-era gentleman suddenly become more real than she ever could have imagined. Is this total immersion in a fake Austenland enough to make Jane kick the Austen obsession for good, or could all her dreams actually culminate in a Mr. Darcy of her own?

I am a Pride and Prejudice snob. I only like the BBC version, with Colin Firth as Mr. Darcy and Jennifer Ehle as Elizabeth Bennett. While there are parts of the newer, shorter, harried, and nuance free Hollywood version I enjoy, like the supposed-to-be-prettiest-sister Jane, who is actually much prettier than the actress in the BBC version, every time I’ve watched it (which, I grant, is only twice), I feel angry afterwards. First, Kiera Knightly is NOT Elizabeth Bennett. Elizabeth Bennett does not smile a ridiculous smile showing her bottom teeth all the time. And she is not flat chested. I mean, come on….we’re talking about the girl who woos Mr. Darcy. With those low-cut gowns in style, I’m guessing there was a little bit of oomph necessary to catch his eye. That and a pair of “fine eyes”. Mostly, though, the entire movie is rushed. The actors spit out their lines in Gilmore Girls fashion, important scenes are entirely cut out, and then two minutes are devoted to watching Kiera Knightly spin on a swing. Frustrating.

Anyways, my point is (and I do have one), that there is only one good movie adaptation…and it’s six hours long and only strays (and not really even strays, just leaves out a few minor details) slightly from the book. So, when the main character in Austenland, Jane, loved this movie as much as me, I knew I could appreciate her.

32 year-old Jane, single and relationship challenged, is obsessed with Mr. Darcy…the dreamy Colin Firth who walks across his magnificent grounds in a wet shirt after diving into a pond (you know the scene). The Colin Firth…I mean Mr. Darcy, who beams at Elizabeth while she’s turning pages for his sister, Georgiana, at the piano (you know this scene too). After her rich great aunt comes to visit her, and subsequently finds her two-disc DVDs hidden behind a houseplant, Jane is surprised when she receives a call following her aunt’s death from the probate attorney. Instead of money, her aunt leaves her an all expense paid for trip to an exclusive British resort, where Jane will spend three weeks living the Regency period lifestyle in an attempt to fulfill, and also hopefully expunge, her Darcy obsession.

I found the beginning of this book to be annoying. Jane is too nervous and melodramatic and not all that likable. For starters, I have no idea why anyone would be ashamed of owning Pride and Prejudice. Houseplants? Please. I’m thinking of fashioning my set up with a chain and wearing it around my neck. See? I’m a true fan. However, the three weeks she spends at Pembrook Park, a Netherfield/Pemberly-esque manor with servants who can’t speak to her, empire wasted gowns, gentleman that are actors (or are they?), turns about the room, walks on the grounds and a ball are simply fantastic. The situations are entertaining, the plot pleasantly twisty and the ending satisfying.

Shannon Hale writes a light-hearted fantasy romance that is sure to please even the snobbiest Jane Austen fans. As a warning, do not expect a Jane Austen book. While Hale does a fair job mimicking some of the dialogue, the novel is thoroughly modern and much less subtle. It is a romance…therefore extremely unlikely to be true. Regardless, when I turned the last page, I had a smile on my face and said, out loud, “That was fun!”