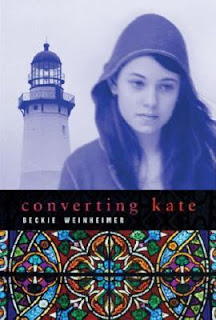 Kate was raised in the Holy Divine Church it influenced everything from her homeschooling to her handmade clothes. But ever since her unbelieving father’s death last year, she has suspected that there’s more to life than memorizing scripture.

Taking advantage of their move to a new town, Kate to her devout mother’s horror quits Holy Divine. She joins the cross-country team, wears shorts to public school, and even tries a traditional Christian church. As she struggles to come to terms with her father’s death and her mother’s unquestioning beliefs, Kate discovers there’s a big difference between religion and faith and that the two don’t always go hand in hand
.

After her father’s unexpected death, Kate begins to question the conservative religious tradition that she has been brought up in. When she and her mother locate to a new town, Kate discovers new ideas, new friends, and is able to gain a sense of peace about her father’s place in her life and his ultimate death.

I liked a number of things about this novel. Kate was a likable character and some of the novel’s minor characters were well-drawn and interesting. However, the novel’s primary focus, Kate’s rejection of her traditional religious upbringing lacked subtlety. In the novel, anyone identified as ‘Christian’ was narrow-minded, ignorant and filled with hate. Non-Christians were liberal and tolerant. I’m sure many teens questioning their religious backgrounds do see things this starkly, but a more sophisticated view, which allowed Kate to question her beliefs while recognizing that there were good, loving aspects of the tradition she was leaving might be more realistic and helpful to teens.

I also found myself distracted by the fact that ‘The Church of the Holy Divine’, described as being a fundamentalist Christian church with cult-like overtones, was actually a thinly veiled version of the LDS Church. I think it might have been a more interesting and honest story if the author had been more open about this. It certainly would have provided a better context for the reader to understand the rich tradition and culture that Kate was choosing to leave behind.