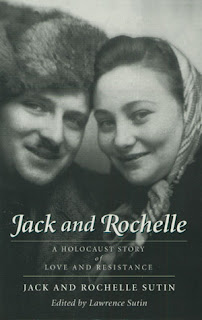 Jack and Rochelle Sutin crossed paths in the winter of 1942-43, when, after separate escapes from Nazi ghetto labor camps, they discovered each other in the wooded lands of Poland. The forest where they remained in hiding was a place where many Jews and Russians, the so-called partisans, had fled to in an effort to escape Nazi persecution.

Despite their bleak surroundings–inhuman living conditions and ever-present danger–Jack and Rochelle began a careful courtship that flourished into a deepening love. With a new determination and a thirst for revenge, Jack led partisan raids on nearby Polish farms that were occupied by Nazi sympathizers. Thus was their resistance waged, often in ignorance of what atrocities were being committed in the rest of Europe. Cut off from the outside world, the partisans’ survival depended on desperate, makeshift warfare strategies. Maintained by a blind faith and their deep love for one another, Jack and Rochelle survived circumstances that had never before been imposed on a people.
Today, Jack and Rochelle are part of a small group of resistance fighters whose testimony offers all readers and students a unique perspective on this terrible episode of human history. Lawrence Sutin herein presents his parents’ story in their own words, stories that he has heard throughout his life. In a thoughtful afterword, he reflects on his experiences as a child of Holocaust survivors.

Ably edited by their son Lawrence, the instructive and inspiring Holocaust narrative of Jack and Rochelle Sutin provides ample proof of both the degradation implicit in the Shoah and the astounding strength and courage Jewish partisans demonstrated in their battle against the attempted Nazi genocide. “Jack and Rochelle” is a deceptively easy book to read; the chapters consist of blended chronological testimonies; Lawrence Sutin honorably avoids imposing his own voice on his parents, instead allowing his mother and father to describe, in their own words, their own cadences, the horrors they faced and the gritty resolve they mustered to fight back. Rarely does a subtitle so accurately depict the contents of a memoir as does their own: “A Holocaust Story of Love and Resistance.”

Both Jack and Rochelle came from educated and enlightened eastern European Jewish families. As the two of them chronicle the onset of anti-Jewish depradations, they remind us of the rich texture of their pre-war lives. This dimension of humanity, of lives complicated by strained love relations, competitive urges and the deeply felt need for independence, makes the Nazi onslaught all the more unsettling and horrific.

Several themes predominate in the Sutins’ braided lives. First is the omnipresence of Jew hatred, whether it be in pre or post war Poland, in the brutally repressive Soviet bureaucracy or the finely honed hatred of Nazi Germany. Indifferent neighbors, vicious anti-Jewish Russian partisans (who commit ghastly sexual offenses against women who want nothing more than to join them in battling a common enemy), and the active participants in human eradication, the Nazis, make the Sutins’ world one of constant peril. Survival is never taken for granted, and Jack and Rochelle’s descriptions of their physical torment, often undertated, is wrenching to read. Personal sacrifice exists on every level: physical, social and spiritual. Rochelle’s first child dies within a day due to exposure when its survival imperils others; Jack is literally covered with pus-filled boils as a result of living outside the boundaries of human habitation.

Yet, neither Jack or Rochelle never complain, never give themselves away to self-pity. Instead, they are infused with the Judaic command to remember and Rochelle’s mother’s insistence on revenge, to take action to avenge the murder of their people. In this charged atmosphere of sanguine justice and physical erosion, amidst the rank and fetid habitat of primitive partisan surroundings, hope and love survive. Jack dreams that Rochelle will appear. She does. Despite sexual abuse and spiritual depletion, Rochelle gradually accepts and receives Jack’s love. He has never stopped loving her.
“Jack and Rochelle” is above all a cry of victory. It is a cry that murder and eradication cannot conquer a people. It is a cry that memory and consecration to life will prevail over death. It is a cry that love can endure, even if it is formed in the absolute crucible of death.