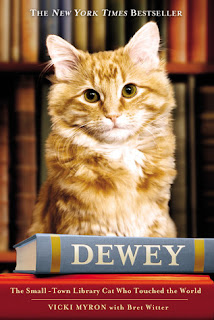 How much of an impact can an animal have? How many lives can one cat touch? How is it possible for an abandoned kitten to transform a small library, save a classic American town, and eventually become famous around the world? You can’t even begin to answer those questions until you hear the charming story of Dewey Readmore Books, the beloved library cat of Spencer, Iowa.

Dewey’s story starts in the worst possible way. Only a few weeks old, on the coldest night of the year, he was stuffed into the returned book slot at the Spencer Public Library. He was found the next morning by library director, Vicki Myron, a single mother who had survived the loss of her family farm, a breast cancer scare, and an alcoholic husband. Dewey won her heart, and the hearts of the staff, by pulling himself up and hobbling on frostbitten feet to nudge each of them in a gesture of thanks and love. For the next nineteen years, he never stopped charming the people of Spencer with his enthusiasm, warmth, humility, (for a cat) and, above all, his sixth sense about who needed him most.

As his fame grew from town to town, then state to state, and finally, amazingly, worldwide, Dewey became more than just a friend; he became a source of pride for an extraordinary Heartland farming town pulling its way slowly back from the greatest crisis in its long history.

The very first thing that will draw you into Dewey is the adorable cat that is on the front of the cover. This is Dewey himself of course and looking at those eyes you can see the soul within him. I have seen a lot of cat eyes but his are so expressive! How I wish I had known this lovely gentleman for surely he must be a noble soul just look at how he holds himself. We first meet Dewey on the harrowing cold morning when he is found in the book drop box of the library a shivering nearly dead little kitten. Thanks to the good handling of his new Moms however Dewey comes out of his cold daze and recovers to become a very gregarious fellow. Who wins the heart of everyone he meets in the library.

The story of Dewey the library cat is well written and emotional. It will pull at every single one of your heart strings with every turn of the page. I also love another underlying message within the book how even strangers can be part of a community. Dewey’s fame brought people from all over to meet him and he treated everyone the same. The library became a place for people to come again to relax within its walls and spend some time with the sweet soul who managed to find the best in everyone he met. How can you not be touched by that kind of story?

I would recommend this book to anyone who likes a good story and of course those who love animals. If you do not know animals have personality and soul you will by the end of this book. Make sure you have time to read when you start Dewey’s book however because you will not want to put it down.