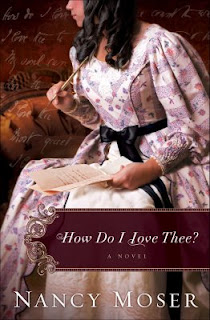 The year is 1845. Elizabeth Barrett is a published poet–and a virtual prisoner in her own home. Blind family loyalty ties her to a tyrannical father who forbids any of his children to marry. She has resigned herself to simply existing. That is, until the letter arrives… “I love your verses with all my heart,” writes Robert Browning, an admiring fellow poet. And as friendly correspondence gives way to something more, Elizabeth discovers that Robert’s love is not for her words alone. Could it be that God might grant her more than mere existence? And can she risk defying her father in pursuit of true happiness?
Nancy Moser has crafted a romantic, emotion-charged novel based on the true story of beloved poet Elizabeth Barrett Browning.