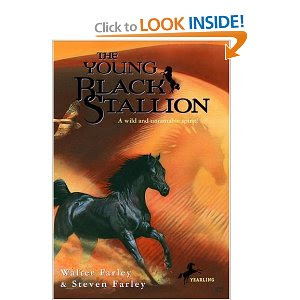 The wonderfully improbable chronicles of the Black Stallion continue with this narrative of the Black’s colthood in the mountains of Arabia. Specially bred to strengthen the bloodlines of Sheik Abu Ishak’s herds, the Black is the victim of a failed horse raid. Driven out of his secluded pasture, the colt takes up with a herd of ibex. Soon he is scaling sheer rock faces and dueling fierce rams to the death. Befriended by Rashid, a young Bedouin, the stallion journeys to the desert, attempting to elude the rival groups of horse traders that seek him. As all devotees of the series know, the Black is finally recaptured and put aboard the tramp steamer Drake , just in time for his star-crossed meeting with Alec Ramsay, his future master. Although this prequel never quite matches the sparkle of the earlier works, it certainly should answer several questions about the Black’s beginnings. Even the book’s rather cloying mystical streak is unlikely to disturb the loyal followers of the legendary stallion.

The father-son authors have produced an excellent story, recreating the youth of the Black until the time when Alex Ramsay witnesses him being loaded–with savage fury and hatred for all men–on board The Drake in a Middle Eastern port. The Prologue and Epilogue are set in the Arizona desert where Alec, now a young man, spends the night with his beloved stallion, grazing nearby. Contemplating the starry nocturnal sky Alec locates the Horsehead Nebula and seriously ponders the tantalyzing theory that his horse was sired by a celestial equine.

The main body of the book narrates the desperate attempts of various men who pursue ownership of Shetan–for pride and breeding purposes. Sheikh Ishak hides the yearling in a remote mountain fastness, but a rival sheikh sends a bold band to steal him. A young hunter and tracker named Rashid is selected to kill the venerable Old Herder, who suspects the colt’s semi-divine pedigree. Abandoned to certain death by the rival sheikh, Rashid spends months in the mountains, trailing Shetan and rescuing him from a ferocious leopard. But toleration of the man’s presence does not forge a true bond between the Arabian strangers. Also Rashid is haunted by the intermittent appearance of a peregrine falcon, which hovers over him like a future menace.

Rashid’s plans to capture and sell Shetan, to assure himself a life of comfort, are foiled by the Ishak and the arrival of a resourceful English agent called The Cat. Who will ultimately triumph during this prolonged battle of wills? His breeder and rightful owner, the rival sheikh, Rashid with whom readers come to empathize, Mansoor (the Cat) or the mighty stallion himself? Dramatic conflict is enhanced from the obvious Man vs Man scenario to Man vs Nature, for the harsh mountains and pitiless desert environments interject challenges unforeseen by human schemes. Characterized by minimal dialogue and elements of surrealism this book proves fascinating for readers of all ages.