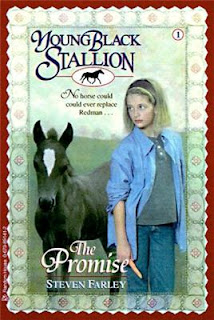 Thirteen-year-old Danielle Connor feels nothing but rage toward Alec Ramsay, the famous young jockey who has turned her family’s farm into a training facility for his Thoroughbred racehorses, including the legendary Black. Now Danielle’s family has to move and her beloved horse, Redman, has been sold. Even after Alec introduces her to a special black colt, Danielle remains determined to be reunited with Redman…at any cost.

As a long time reader of the ‘Black Stallion’ series, I was curious to see what Mr. Farley’s son had done with the stories since I felt Walter Farley left the series unfinished. I loved the series as a child and have even re-read the books as an adult (as my readers can now tell by all my reviews). Although I applaud anyone’s efforts in writing and publishing a book, Steven Farley might have wanted to write about a different subject. The ‘Young Black Stallion’ series is looking like it might be a big disappointment; this story was silly and pointless. In several instances the author has taken sentences, word for word, from his father’s earlier ‘Black Stallion’ books and simply changed the character’s names. The characters are poorly developed and clumsy with each other. The plots have a lot of holes in them, even for children. Based on the earlier stories, Alec could not possibly be only 18 and why should he be? Alec supposedly wanted the farm where Danielle lived in order to board his horses there, then with the exception of a mare and foal, all the horses he supposedly acquired the farm for remained at another facility. A Thoroughbred operation such as Alec and Henry had supposedly built would not isolate one promising colt and spend so much one-on-one time. Where were all the other Hopeful Farm colts? The series would probably read better if it did try to weave the ‘Black Stallion’ characters into it, but rather expanded its own story.