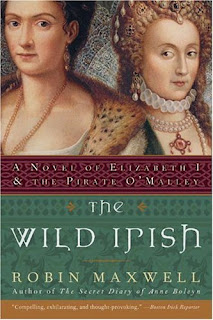 The glorious, turbulent sixteenth century is drawing to a close. Elizabeth, Queen of England, has taken on the mighty Spanish Armada and, in a stunning sea battle, vanquished it.But her troubles are far from over. At home she is challenged at every turn by the brilliant but reckless Robert Devereux, Earl of Essex, whose dangerous mix of passion and political ambition drives the aging queen to distraction. Just across the western channel, her colony Ireland is embroiled in seething rebellion, the island’s fierce untamed clan chieftains and their “wild Irish” followers refusing to bow to their English oppressors.

In the midst of the conflict is Grace O’Malley, notorious pirate, gunrunner, and “Mother of the Irish Rebellion.” For years, the audacious Grace has plotted and fought against the English stranglehold on her beloved country. At the height of the uprising Grace takes an outrageous risk, sailing up the River Thames to London for a face-to-face showdown with her nemesis, the Queen of England.

The historic meeting of these two female titans — perfectly matched in guts, guile, and political genius — sets the stage for the telling of the little-known but crucial saga of Elizabeth’s Irish war, a conflict at the very root of every subsequent Irish uprising. No one breathes life into these strong and pugnacious women as does Robin Maxwell in this captivating novel, a rousing tale that makes history gloriously real.

Being Irish and the fan of the reign of Elizabeth I as well naturally I was drawn to this book. Now it did start off a little slow, I will not lie to you there. But once you get through about the first 30 pages or so the book picks up. After that first hard block it is like the writer found their rhythm and settles into telling you the story.

Getting to be privy to a fun fictional look at the meeting between the famous Queen and the famous Irish pirate is fantastic. Grace O’Malley was one tough cookie! The Irish Pirate Queen is a fantastic woman who stood up for what she believed in against the English. Now granted in true life not all of what she did was thought of as good, but nor was the tyranny the English committed against the Irish. And as much as I love Elizabeth I she was one of the worst with Irish relations.

Sons were taken captive she wasted no time in petitioning the great Queen and her enemy. She met with Elizabeth at Greenwich Palace, wearing a fine gown, the two of them surrounded by guards and the members of Elizabeth’s royal Court. Ní Mháille refused to bow before Elizabeth because she did not recognize her as the Queen of Ireland, and wished to show Elizabeth this. It is also rumored that Ní Mháille had a dagger concealed about her person, which guards found upon searching her. Elizabeth’s courtiers were said to be very upset and worried, but Ní Mháille informed the queen that she carried it for her own safety. Elizabeth accepted this and, though the dagger was removed from Ní Mháille’s possession, did not seem to worry The women were only 3 years apart in age, an its said they got along very well. Their meeting was conducted in Latin as Elizabeth did not speak Gaelic, and Ní Mháille spoke no English.

If you have a passion for history, and love the time period this is the book for you. It gives you a close look at not only the meeting but the inner workings of the court of the mighty English Queen. And just how much her courtiers were after. Generally their own purposes.

One thought on “Book Review: The Wild Irish by Robin Maxwell”