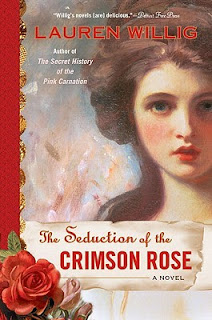 Determined to secure another London season without assistance from her new brother-in-law, Mary Alsworthy accepts a secret assignment from Lord Vaughn on behalf of the Pink Carnation. She must infiltrate the ranks of the dreaded French spy, the Black Tulip, before he and his master can stage their planned invasion of England. Every spy has a weakness and for the Black Tulip that weakness is beautiful black-haired women his petals of the Tulip. A natural at the art of seduction, Mary easily catches the attention of the French spy, but Lord Vaughn never anticipated that his own heart would be caught as well. Fighting their growing attraction, impediments from their past, and, of course, the French, Mary and Vaughn find themselves lost in a treacherous garden of lies.

And as our modern-day heroine, Eloise Kelly, digs deeper into England’s Napoleonic-era espionage, she becomes even more entwined with Colin Selwick, the descendant of her spy subjects.

Mary and Vaughn are my favorite couple (so far). I think it’s because they both don’t claim to be heros. They acknowledge that they are self-motivated and everyone believes that of them (including readers).

But as the story unravels, they are not as conceited as everyone thinks, even to themselves. Willig really put them through the ringer in this book (like no other couple before or after). To date, they are the only characters who have been shot at (well, Vaughn was…Mary had the un-Mary-like task of cleaning him up and saving his life) and blown up.

Nothing like an explosion to profess their undying love for each other. Yes, Mary all beautiful with blood down the side of her face from a piece of shrapnel and Vaughn with a reopened bullet wound through his side chest. Both their faces blackened with ashes. Yet, still sarcastic as ever.

That has go to be one of my favorite “love declaration” scenes in any the book.