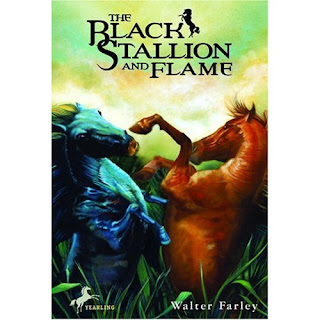 While flying to a race, Alec Ramsay and the Black’s plane crash-lands in the stormy Caribbean. Chance brings the Black to the hidden island home of the giant red stallion, Flame. Such a small island can only support one alpha male. But before the two can fight–a fight that can only result in the death of one–a new danger appears. Together, can the stallions defeat the deadly foe which threatens the lives of the entire herd of wild horses?

In The Black Stallion and Flame, Alec and the Black are in a plane wreck when flying over the Caribbean. The chapters then alternate between Alec and Henry, who make there way to a populated island, and the Black, who makes his way to a nonpopulated island. Alec and Henry are looking for the Black when they discover that a deadly diseased vampire bat is on the loose. Meanwhile the Black finds his way onto an island through a tiny passage that is almost invisible. Alec and Henry take a boat out looking for the Black and discover the island that he is on, but they can’t figure out how to get onto it (this is the same island from The Island Stallion, for those of you who have read it). Alec realizes that the bat has traveled in their boat with them to the island! The Black meets Flame, the Island Stallion, but it doesn’t use the name “Flame” in the story so unless you have read The Island Stallion, you have no idea who the “Flame” in the title is. Anyway, they are battling! But then the bat comes onto the island and starts trying to attack them! Will the horses team up to defeat the deadly bat, or will one (or both) of the heroes die (either thru battle or from the bat)? And there’s the big question looming over it all: Will Alec find his horse? And if he does, will the Black be willing to give up his new life in the wild for the world of racing? This is a super book!