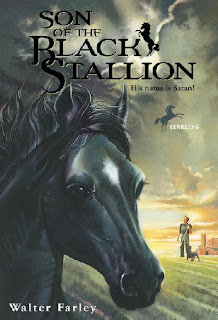 When Alec receives the Black Stallion’s first son as a gift, he believes his dreams have come true, but Satan’s savage arrogance makes him dangerous and unpredictable. Still, Alec is resolved to gain the fiery colt’s trust, even if he must risk his life to do it.

This is a story that once again is well done by Walter Farley. I have seen some reviews that say the outcome is not believable at all. However speaking as someone who has worked with a horse as Nasty as Satan is and has seen him turn around in the end and become trusting of people I can say that it is perfectly believable.

Alec is given the gift of the first son of his beloved Black stallion but he soon finds out that this son is more mal-tempered and cruel than the Black ever was. Henry warns Alec to stay away from him, thinking it is much better if they just get rid of the dangerous colt. Nevertheless, Alec will not give up on him. And when something happens…suddenly Satan changes his tune and finds out as many horses do that it is not so bad working with a human partner.

For anyone who loves horses and Arabians this series just keeps giving and giving. Walter Farley writes amazingly good stories with human characters you care about but also the horses. He gives each horse its own personality and its own character that just leaps off the page and keeps you reading.