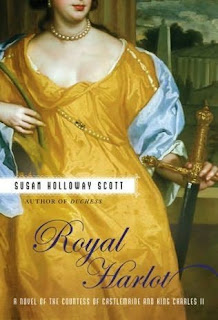 London, 1660: Ready to throw off a generation of Puritan rule, all England rejoices when Charles Stuart returns to reclaim the throne. Among those welcoming him is young Barbara Villiers Palmer, a breathtaking Royalist beauty whose sensuality and clever wit instantly captivate the handsome, jaded king. Though each is promised to another, Barbara… more » soon becomes Charles’s mistress and closest friend, and the uncrowned queen of his bawdy Restoration court. Rewarded with titles, land, and jewels, she is the most envied and desired woman in England–and the most powerful. But the role of royal mistress is a precarious one, and Barbara’s enemies and rivals are everywhere in the palace.

I will open this review by saying that Charles II of England is perhaps one of my least favorite Monarchs of England. Not that he did anything particularly bad to my tastes but he just does not fit into my Gem pile. That said I could barely put down this book. The story of Charles II and Barbra Villiers is pretty well known among historians, and she is always vilified. Always called any score of names that in my opinion could be laid at any royal mistress’s feet, but she always gets the worst of it.
Susan Holloway Scott did not gloss over any of the things that Barbra Villiers was, she was vain, and wonton and even calculating. However she brought to light a side that is most often over looked by the usual rabble, she was loving and tender and generous to her family and friends. Let’s face it to have remained in the King’s favor as long as she did she had to have more to her than just a nice body.
So if you like historical fiction and you don’t mind a lot of the sexual innuendo and some not innuendo in your book I recommend this one for you. It was a good read and one that thoroughly held my attention to welcome me back into the grips of my book obsession and reviewing. My only regret about this one is going to be selecting one to follow it.