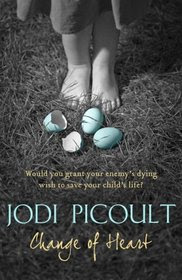 One moment June Nealon was happily looking forward to years full of laughter and adventure with her family, and the next, she was staring into a future that was as empty as her heart. Now her life is a waiting game. Waiting for time to heal her wounds, waiting for justice, waiting for a miracle. — For Shay Bourne, life holds no more surprises. Th… more »e world has given him nothing, and he has nothing to offer the world. In a heartbeat, though, he gets one last chance for salvation, and it lies with June’s 11-year-old daughter, Claire. But between Shay and Claire stretches an ocean of bitter regrets, past crimes, and the rage of a mother who has lost her child. Father Michael is a man whose past decisions led him to devote the rest of his life to God. But when he comes face-to-face with Shay, he must question everything he’s been taught to believe about religion, about good and evil, about forgiveness. About himself

What would you do if your child was dying? What would you do if the only person who could save your child was someone you thought killed your husband, and your other child? These are the questions that Change of Heart asks you. These truly are impossible choices to make. Jodi Picoult takes you through an emotional story that has you wondering about a lot of things. Is the bad guy really the bad guy? What would you do if you were faced with this same choice you had to make? What is the difference between religion and faith? Change of heart takes on so many heavy issues that it is impossible to call this a light read. It takes on Capital punishment, Organ Donation, the United states Justice System as a whole, and religion. Everywhere you turn in this story there is a topic that is mostly spoken of in whispers and hushes, so not to offend anyone. This is one of the reasons that this book is so good. When you read a Picoult novel you know you are going to get something emotional that will pull at your heart strings. I could not believe just how pulled in I got though, I found myself not wanting Shay Bourne to be killed, wondering if he truly did the crime he had been convicted of and yet wanting the little girl Claire to live. There is no denying that there are some shadows of the Green Mile in this book with some of the things that happen in the prison with Shay there, and even the relationships with some of the guards. That being said the book makes no secret of that and even makes a small joke of it in calling Shay Bourne “green Mile” in one passage. This book is not Green Mile, and while it has some similar themes stands fully on its own, and gets a hearty MUST READ from me.