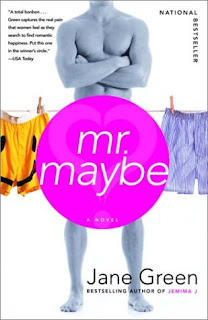 To Libby Mason, Mr. Right has always meant Mr. Rich. A twenty-seven-year-old publicist, she’s barely able to afford her fashionable and fabulous lifestyle, and often has to foot the bill for dates with Struggling Writer Nick, a sexy but perpetually strapped-for-cash guy she’s dating (no commitments–really). So when Ed, Britain’s wealthiest but stodgiest bachelor, enters the picture, her idea of the fairy-tale romance is turned on its head. Libby soon finds herself weighing the advantages of Nick’s sexual prowess and tender heart against Ed’s luxurious lifestyle and unlimited retail therapy. But when the diamond shopping commences, Libby is forced to realize that the time for “maybe” is up

It is no secret that I like Jane Green, she is one of the authors that after reading the first book of hers I promptly picked up as many of the others as I could get my hands on to try to complete the collection. Mr. Maybe for me was not her best work. It was not a bad book but it just did not seem to have the usual flair that I have come to expect when reading a Jane Green.

There are several points in the book where it just seems to drag on and there are things that just do not seem to be needed. Libby Mason as a character, well I felt I could not connect with her much. She is very superficial, and a bit over dramatic and there are most assuredly times where I want to swat her upside the head. I even found myself wishing her best friend in the book Jules would do just that.

Now with the negative parts said, I did still enjoy the book overall. It was not a waste of my reading time and it did have some great parts. Nick was by far my favorite character, at first I was not sure I would like him as he was being played up as a kind of wastrel but overall he was the brightest spot in the list of characters in this book, he is witty, funny and not a wastrel but a creative mind who may not have taken the best route to what he wants but he got it in the end.