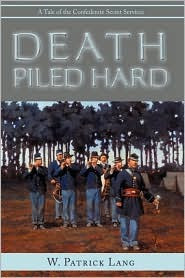 When Claude Devereux’s brother, Patrick, is killed at the Battle of Gettysburg, he’s devastated.But there is little time for grief. Devereux, a Confederate spy, has worked his way behind enemy lines in the North to become a prominent adviser to Secretary of War Edwin Stanton. If General Robert Lee and his comrades in the South have any chance of succeeding in beating the Union, Devereux knows that he must keep his cover at all costs. So he steers clear of danger even when he doesn?t want to do so.One of Devereux?s main tasks is to find out more about General Ulysses Grant, who has come to Washington to assume command of the Union army. The general is about to lead his troops on the Overland Campaign, a series of battles through the heart of Virginia.Devereux must do all that he can to stop Grant in his tracks and help the South win its independence in Death Piled Hard.

In this second of a trilogy (which I honestly did not know when I started) we gain insight into the powerful internal and external forces that threaten to tear Claude Devereux asunder. As a Confederate spy he is well and truly lodged in the heart of the Northern war machine, but he wishes fervently to return to the command of his beloved 17th Virginia Infantry regiment. Claude is a newly named Colonel of US Volunteers, a gray man in a blue uniform, and his heart is full of hate. As he goes to join Grant’s Headquarters before the Battle of the Wilderness, the pressures are intense.

This author knows the Civil War, but more important, he knows WAR. The battle scenes are violent, and nearly poetic in their terribleness. A modern reader looks back through the window of foreknowledge and marvels at the inevitability of Grant’s arrival as General-in-Chief. The battle of attrition is on, but the elegant Bobby Lee has moves left.

These books are as close to a time machine as we now can achieve. I will be getting the FIRST one and The Third ASAP.