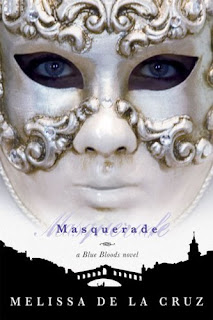 Schuyler Van Alen is starting to get more comfortable with her newfound vampire powers, but she still has many unanswered questions. A trip to Italy in search of her grandfather only serves to make things more confusing. What secrets are the leaders of The Committee hiding? Meanwhile, back in New York, preparations are feverishly underway for the famous Four Hundred Ball. In true Blue Blood fashion, the ball is totally fab, complete with masks and hidden behind this masquerade is a revelation that will change the course of a young vampire’s destiny.

The thrilling sequel in Melissa de la Cruz’s vampire mythology has all the glamour, attitude, and vampire lore that made the first book a hit.

Masquerade is the second book in the Blue Bloods series, and we once again find Schuyler dealing with the issues that have been thrust upon her by the change. When we come upon her at first she is in Venice looking for her grandfather. The effort seems fruitless until a chance meeting at an art gallery. Or perhaps it is not chance?

When we go back to New York and back to Schuyler’s usual life we follow the story that was set up for us by the first book. It is a good continuation on the series, and personally my favorite thing about the book was some of the history they went into. They have gone through and shown s more of the “legend” of vampires as it is seen in this series. It is certainly a different take on the fallen angels, and Lucifer I will say that.

Unfortunately for everyone in the books The Silver Blood is still on the prowl and the person that they thought it was is not it. The book is not a stand alone you need to have read the first one to read it, and the book does not end fully on its own. You are left wide open and hanging for the third book in the series. Normally this is not my favorite way for a book to wrap, but over all the book is good.