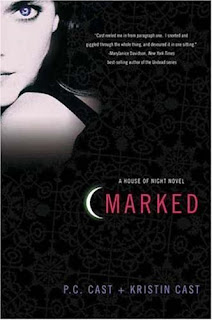 The House of Night series is set in a world very much like our own, except in 16-year-old Zoey Redbird’s world, vampyres have always existed. In this first book in the series, Zoey enters the House of Night, a school where, after having undergone the Change, she will train to become an adult vampire–that is, if she makes it through the Change. Not all of those who are chosen do. It’s tough to begin a new life, away from her parents and friends, and on top of that, Zoey finds she is no average fledgling. She has been Marked as special by the vampyre Goddess, Nyx. But she is not the only fledgling at the House of Night with special powers. When she discovers that the leader of the Dark Daughters, the school’s most elite club, is misusing her Goddess-given gifts, Zoey must look deep within herself for the courage to embrace her destiny–with a little help from her new vampyre friends.

Marked was a branch out for me. You see I am a Vampire “purist” as generally I only read Anne Rice. But than my friends insisted I read the Twilight Saga, and I did and lo and behold I loved it. And so when these same friends recommended the house of Night I decided to read it. Well I have to say good choice.

The house of Night is a school, and to me the way the story is written it’s a little Harry Potter meets Twilight. But that makes for a great combo. You see in the reality that is marked people (humans) are well aware of Vampires. And in-fact vampirism is something that happens with your DNA right around puberty instead of ageing bit. You go through “The Change” you are marked by a Tracker than need to get your hinny to the Vampire school pronto or it won’t go well.

Life isn’t all easy pie with those being Marked, after all your body can reject the change and than you die. Simple as that. The Cast’s write an excellent and compelling book that’s filled with the twists and turns of just wanting to be accepted all the while being different, even among the others you’re changing with. Zoey is after all special, and has some major gifts but even that makes her feel like a bit of an outsider.

Marked even has its own Draco Malfoy in the form of a blonde girl who has dubbed herself Aphrodite (you rename yourself when you start your “New” life.). She is the school bully and makes Zoey’s new friends uncomfortable. But lucky for everyone Zoë can stand up to her. If you like Vampire novels, and don’t mind some teen angst this is a good book for you. The angst is more adult than Twilight, but its there. I really did enjoy reading Marked, and you can bet I will be happy to start reading the second book in the series.

One thought on “Book Review: Marked by P.C Cast and Kristin Cast”