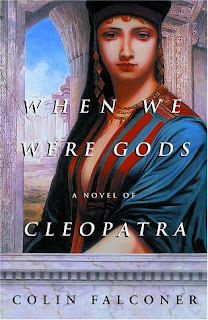 “The most complete woman ever to have existed, the most womanly woman and the most queenly queen, a person to be wondered at . . . whom dreamers find always at the end of their dreams.”
— Theophile Gautier, 1845

Arrestingly beautiful and fiercely intelligent, Cleopatra VII of Egypt was barely more than a teenager when she inherited the richest empire in the world–one that stretched from the scorching deserts of lower Egypt to the shining Mediterranean metropolis of Alexandria, with its famed libraries, storehouses, and treasuries. Imperiled at every turn by court conspiracies and Roman treachery, the young queen was forced to flee Alexandria and live in exile while a foreign army overran her city and her own siblings plotted her downfall. With nothing to lose, Cleopatra brazenly sought a partnership with the only man who could secure Egypt’s safety: Julius Caesar, a wily politician and battle-hardened general with a weakness for women. The result was a passionate love affair that scandalized Rome and thrust Cleopatra into the glittering but deadly world of imperial intrigue and warfare– a world that she would mesmerize and manipulate even after Caesar was gone.

At the height of her power and fame, Cleopatra fell in love with Caesar’s protégé and successor, Marc Antony, a handsome general known as much for his drunken hedonism as for his victories in battle. Brash, irresistible, and fatally unreliable, Antony’s once-strong hold on the Roman Empire was slipping fast, and with it slipped Cleopatra’s fortunes. When the tide had finally, irrevocably turned against her, the proud queen plotted a last, spectacular maneuver that was to save her children, her empire, and her place in the pantheon of gods.

Colin Falconer’s bold, sensuous prose takes the reader inside the walls of Alexandria’s great palaces and into Cleopatra’s very heart, creating a vivid portrait of an unforgettable woman who thrived and triumphed in a world ruled by men. This is the story of a legendary woman’s most glorious time, a story that blazes through thousands of years of history to capture the imagination of readers today.

If you know me you know how much I love Caesar, Antony and Cleopatra. This book is by far one of the best books of this time in history I have read. Some of the way Caesar was portrayed seemed a bit to crass to me, but overall the characters were spot on. You can certainly tell Colin Falconer did his research on the topic, I felt like I could have been walking along side these characters in the ancient world. No book is going to be perfect because when it comes down to it we really do not know exactly what happened or how they were done, but this book is very close I think.

There is license taken of course this is a work of historical fiction, but if you want to read a book that will make you feel like you have stepped back in time to see the fantastic story of the greatest queen of the ancient world and her well known love affair and love story read this book, the title is perfect for these players of the ancient world truly were gods.

One thought on “Book Review: When we were Gods by Colin Falconer”