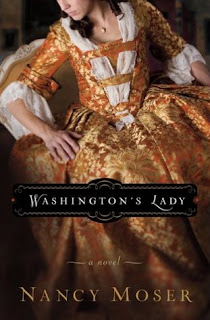 She dreams of a quiet life with her beloved George, but war looms…

Though still a young woman, Martha Custis is a widow. But she is not without means and has no desire to remarry. Not, that is, until a striking war hero steps into her life and she realizes she is ready to love again. Yet she wonders whether this man, accustomed to courageous military exploits, can settle down to a simple life of farming and being a father to her children. Even as she longs for domestic bliss, Martha soon realizes she will have to risk everything dear to her and find the courage to get behind a dream much larger than her own. Known for moving first-person novels of Nannerl Mozart and Jane Austen, Nancy Moser now brings to life the loves and trials of the First First Lady of the United States.

Nancy Moser does it again. Washington’s Lady is an absolute masterpiece. And a fine tribute to the lady who stood alongside Americas first president, our reluctant and yet dutiful hero. All those who know me know how much I adore this time of American History and this book lives up to my passion for it. Admittedly I do not know as much about George Washington and Martha as I would like, as I am a Jefferson girl (can you guess) But is books like this that make me crave to learn more about him and his Martha.

In this book we follow Martha’s story we meet her at the time of the death of her first husband and how she will move forward from there. Married only 7 years to that first husband, she was left the wealthiest widow in Virginia. She rejects many suitors, as she hasn’t found one who can capture her heart or inkling like that. Enter Colonel George Washington. Their match truly was a love match, and Martha stayed beside George through it all.

There were times when Martha did not wish the path that George took, but she was still by his side. She may have disagreed with her old man but she always supported him. The book does make a point at the very end to say that many say without George Washington we would not have America, which is very true. And the book than goes onto say, Without Martha Washington there would be no George. And this comment is also true. Behind every great man is a great woman. This book has taken place as the best book that I have read this year. I highly encourage anyone and everyone to pick it up, and read it.