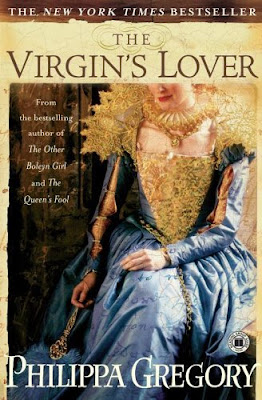 In the autumn of 1558, church bells across England ring out the joyous news that Elizabeth I is the new queen. One woman hears the tidings with utter dread. She is Amy Dudley, wife of Sir Robert, and she knows that Elizabeth’s ambitious leap to the throne will draw her husband back to the center of the glamorous Tudor court, where he was born to be.

Elizabeth’s excited triumph is short-lived. She has inherited a bankrupt country where treason is rampant and foreign war a certainty. Her faithful advisor William Cecil warns her that she will survive only if she marries a strong prince to govern the rebellious country, but the one man Elizabeth desires is her childhood friend, the ambitious Robert Dudley. As the young couple falls in love, a question hangs in the air: can he really set aside his wife and marry the queen? When Amy is found dead, Elizabeth and Dudley are suddenly plunged into a struggle for survival.

Philippa Gregory’s The Virgin’s Lover answers the question about an unsolved crime that has fascinated detectives and historians for centuries. Intelligent, romantic, and compelling, The Virgin’s Lover presents a young woman on the brink of greatness, a young man whose ambition exceeds his means, and the wife who cannot forgive them.

As my yearly renaissance festival rolls closer I decided to embroil myself for a little bit into the time period by reading The Virgins Lover by Phillipa Gregory. I have been a big fan of her stories, and am always happy to read a tale as told by her. I was however a little disappointed in this book. The same enamoring story just was not there for me with The Virgins Lover.

The prose itself was not the problem for as far as writing style it is the same style I have come to appreciate with Phillipa Gregory, but the story itself was lacking. Listening to Amy whine was just one of the barbs that annoyed me beyond measure. Now I can understand her pain, and believe me I do. But when one married a man in such a time you had to expect some of the things that would be happening. Her husband was almost killed, she should have been happy he was not. Though on the flip side, he should have been a better husband without a doubt.

The story of Robert Dudley and Elizabeth is not a new one, but I had hoped for some excitement from one of my favorite historical authors. But I was a bit disappointed. The Virgins Lover was to me the same rehashing of one of the best known assumed romances. It was a dragging read for me. So as much as I love Phillipa to me this is one to skip. But it won’t stop me from continuing to read her works. They can’t all be winners after all.