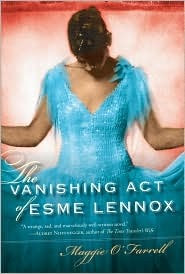 In the middle of tending to the everyday business at her vintage clothing shop and sidestepping her married boyfriend’s attempts at commitment, Iris Lockhart receives a stunning phone call: Her great-aunt Esme, whom she never knew existed, is being released from Cauldstone Hospital, where she has been locked away for over sixty years. Iris’ grandmother Kitty always claimed to be an only child. But Esme’s papers prove she is Kitty’s sister, and Iris can see the shadow of her dead father in Esme’ face. Esme has been labeled harmless; sane enough to coexist with the rest of the world. But Esme is still basically a stranger, a family member never mentioned by the family, and one who is sure to bring life-altering secrets with her when she leaves the ward. If Iris takes her in, what dangerous truths might she inherit? Maggie O’Farrell’s intricate tale of family secrets, lost lives, and the freedom brought by truth will haunt readers long past its final page

Iris Lockhart is going about life, minding her own business and trying not to think about the fact that she is in love with her step-brother when *bam*: she finds out she has a great-aunt that she’s never heard of who’s been locked up in an asylum for the last sixty years. Iris feels compelled to take Aunt Esme under her wing and the novel goes on to reveal the events that led to Esme’s lockup while Iris tries to sort out her own life.

Wasn’t too crazy about this one. The book vacillates between Iris’s life and what happened to Esme that led her to lockup in the nuthouse. It took a while to figure out that the random stream-of-consciousness passages were coming from an addle-pated grandmother and that added to the bit of confusion over the rapidly changing points of view in the novel.

Nor was the (adopted, step, whatever) brother/sister-being-in-love-thing working for us. Yes, we understand they weren’t blood related. It was still creepy in a V.C. Andrews kind of way.

O’Farrell did a nice job of conveying the terrible conditions that existed (and still do, to some extent) asylums during the early 20th-century, but she didn’t play enough to this strength. It was one of those novels that could have been great, but fell flat, although we admit the ending was pretty sharp. Ultimately, it needed more One Flew Over the Cuckoo’s Nest quality to really work.

Kinda meh on this one. Don’t rush out today to buy it…perhaps a library checkout would be better because it does have a pretty snappy ending.