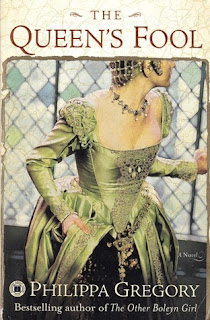 It is winter, 1553. Pursued by the Inquisition, Hannah Green, a fourteen-year-old Jewish girl, is forced to flee Spain with her father. But Hannah is no ordinary refugee. Her gift of “Sight,” the ability to foresee the future, is priceless in the troubled times of the Tudor court. Hannah is adopted by the glamorous Robert Dudley, the charismatic son of King Edward’s protector, who brings her to court as a “holy fool” for Queen Mary and, ultimately, Queen Elizabeth. Hired as a fool but working as a spy; promised in wedlock but in love with her master; endangered by the laws against heresy, treason, and witchcraft, Hannah must choose between the safe life of a commoner and the dangerous intrigues of the royal family that are inextricably bound up in her own yearnings and desires.

Teeming with vibrant period detail and peopled by characters seamlessly woven into the sweeping tapestry of history, The Queen’s Fool is another rich and emotionally resonant gem from this wonderful storyteller

Gregory, the reigning Queen of historical fiction, weaves a tale that is as much an insight into the Tudor court as it is into religious history. The protagonist Hannah, is a secret Jew serving a Catholic Queen and befriending a Protestant Princess. What a catalyst for an electrifying plot!

Being that this story is based in history and immersed in fact, there are twists and turns that you will anticipate. However the addition of a completely fictional heroine adds a layer of intrigue and provides you with plot points you will not see coming. It is such a satisfying narrative arc that you won’t want it to finish and you certainly won’t want to leave Hannah behind.

Hannah is a character full of contradictions. Like many women of the time, Hannah’s age and her sexual innocence leave her at the mercy of men who would use her for social elevation. However her education and life experience make her cunning a formidable player in these war games. She gives her heart freely to Robert Dudley, Queen Mary and Princess Elizabeth all at once and in doing so endears them all to the reader. Yet she finds it hardest of all to give herself over to a love far greater than any of these, one grounded in safety and protection. She is a tangible character and one I am sorry to say goodbye to.

This was one of the most enjoyable history lessons I’ve ever had and a formidable novel next to ‘The Other Boleyn Girl’. I am so grateful for the sympathy and understanding I now have for England’s first female ruler and one of history’s most notorious tyrants. I saw ‘Bloody Mary’ through Hannah’s eyes and now history is not just black and white, it is all shades of red.