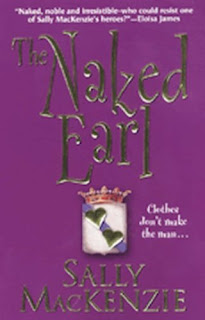 He Took Her By Surprise

When a naked earl climbs through the window into her bedchamber, Lady Elizabeth Runyon does the proper thing: She screams. Loudly. And then… well, Lizzie has had enough of being proper. She won’t be commanded to put on her nightgown. Just this once, she will be absolutely daring…

She Returned The Favor

Robert Hamilton, Earl of Westbrooke, has no intention of being tricked into marriage by a detestable female, and if he has to flee naked across a rooftop, he will. Jolly good there’s an open window waiting — as well as an undressed, slightly drunk, and alluringly beautiful Lady Elizabeth. Oh dear. If they are caught together, he might have to marry her. The idea is delicious… and the temptation is irresistible…

It is time to wander around with some more naked nobility. This time I have set my sights on the third book in the series, and we will talk more in depth with The Earl of Westbrooke, Robbie. Robbie was seen as a character in both The Naked Duke and The Naked Marquis, and in those stories he saw his to best friends get the terrifying leg shackle. Something Robbie reverently avoids, he has become very adapt at escaping the parsons mousetrap.

Or is that what he really wants? Is Robbie truly afraid of marriage, or is he afraid of something else? We will find out in this story that Robbie has a terrifying secret, and no matter how much he loves Lady Elizabeth, he can not marry her. And he does love her, its no secret that Lizzie the Duke of Alizarins sister loves Robbie, and among the ton it is not secret he casts the same glances.

The Naked Earl is a fantastic story, just like the other two books. It does have a few small points that drag a little bit. But other than that it is titillating. And like The Naked Duke it steps out of some of the normal’s of the romance genre. We have a very bad villain, and also a villainess. You will even find a few soft mentions to BDSM, nothing to terrify your senses. But the villains to make a mention of it. Over all if you have enjoyed the other books in the series you will like this one. If you havent read the others you will want to so you know who all the characters are. Although you could get away with just reading The Naked Duke. So if you’re a romance reader join me in giggling at the romps of the Naked Nobles, Robbie is sure to make you laugh!