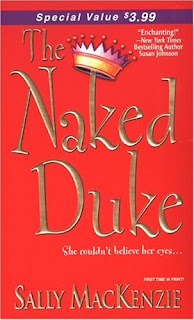 Sophisticated. Scandalous. In fact, Miss Sarah Hamilton, a proper Philadelphian, finds London society altogether shocking. How can it be that she has awakened from her innocent slumber to find herself in bed next to a handsome — exceedingly naked — man? The laughing onlookers standing in the doorway are no help whatsoever and surely this amorous lunatic cannot be a duke, as he claims. She is compromised — though she certainly will not marry him!

James, the Duke of Alvord, is enchanted by his unexpected bedmate — and not at all afraid of her pink-cheeked fury. True, the circumstances and place of their meeting are most unusual, but the spirited American who’s pummeling him with a pillow is an incomparable beauty. If Sarah will only listen to his perfectly rreasonable explanation, James is sure that he can capture her heart … forever.

The first thing anyone can say about The Naked Duke is the fact that this is not your mother’s bodice ripper. There is a fair amount of violence in this novel, from rape and murder to attempted rape, and assault and more murder. But that being said the novel itself is very well written and these added elements while making it a little harsher also make it more exciting.

Sarah Hamilton is not your typical heroine of a romance book. She is from America and goes to England when her father dies to see her uncle the Earl. Sarah finds out when she arrives that her uncle has died, and all she’s left with for family is her drunkard rake of a cousin. But don’t count Robbie as a complete sot yet he does come through in the end. Sarah is also older and very naive raised relatively sheltered life with some spinsters. But in the end that doesn’t stop her traitorous body from reacting to what she feels.

The Duke of Alvord is an even more of an unlikely person to find in real life let alone in a romance novel. As a 30 year old male, his nickname spread by his vicious cousin Richard is Monk, and shockingly well deserved. But I find these facts to be refreshing in a romance novel. These two people who are relatively innocent in the ways of the bed sheets find themselves unexplainably drawn to one another. It’s nice to see them fight and struggle with it, like a normal person would. Struggling to keep a claim on their morals when wanting to give into the desire that flames between them.

The Naked Duke is an excellent read and if you’re looking for something a little fresh in your historical romance genre this book will do it for you. It is a part of the “Naked” series, and I think it’s a great start to the series. Based on this book I plan without a doubt to continue on and see what the other naked fellows are up to.