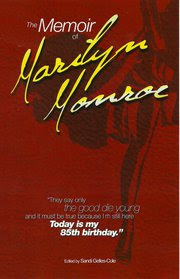 Sandi Gelles-Cole imagines the life the screen legend and enduring cultural icon might have led — from the opening scene (below) to her 85th birthday on June 1, 2011. DRAMA QUEEN June 1, 2011 They say only the good die young and I guess it s true because I m still here. Today is my eighty fifth birthday. During these years I have lived three lives: Before Marilyn, Being Marilyn and After. I created Marilyn Monroe and then men molded her: studios, agents, and husbands. Ever since the night I did not die, I have tried to leave her behind, but wherever I went, the creature followed. I tried to run. I tried changing my name, my country of residence, my hair color, body type, career and sexual preference. I went to college for coursework in Humanities and studied Russian Literature. But there was no escaping her. The character I created became my own personal monster and devoured me in the 50s, and even after she died I could no more be someone else than I could grow a penis, change my skin color, or stop being a movie star. My so-called death scene is always described the same: My housekeeper, Eunice Murray, finds my wasted, naked body tangled in a sheet, wet from secretions better left unexplained. I am face down with one hand hanging over the telephone. This detail is discussed often; am I answering a call or making one and if I am calling, then whom? But it did not happen that way. I cheated death. . .

I am a huge Marilyn Monroe fan, I always have bee and found what happened to her to be tragic, as so many early deaths can be. This book is an interesting and diffrent look into the what might have happened.

It is of course fictionilized as alternative history but if you have always wondered well what if, maybe they didn’t this is a great read it takes a look at the what if’s behind one of hollywoods most famous deaths. I reccomend it, a quik and fun read.