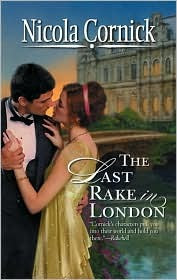 Under a blaze of chandeliers, in London’s most fashionable club, Jack Kestrel is waiting. He hasn’t come to enjoy the rich at play, he’s there to uphold his family name. But first he has to get past the ice-cool owner: the beautiful Sally Bowes. And Jack wants her to warm his bed–at any price Edwardian society flocks to Sally’s club, but dangerous Jack Kestrel is the most sinfully sensual rogue she’s ever met. Inexperienced with men, the wicked glint in Jack’s eyes promises he’ll take care of satisfying her every need….

I spent most of this book hoping the heroine would buck up and kick her boorish hero squarely in the family jewels. The writing wasn’t horrible , except for repeated misuse of the word “quiescent.” Although, given what a doormat the supposedly independent and self-minded heroine is, perhaps quiescent IS the word for her….this one rates a meh. But at least it was a fast read.