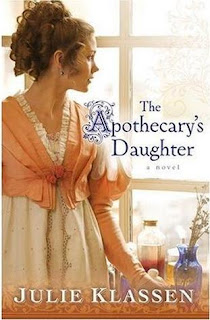 Lillian Haswell, brilliant daughter of the local apothecary, yearns for more adventure and experience than life in her father’s shop and their small village provides. She also longs to know the truth behind her mother’s disappearance, which villagers whisper about but her father refuses to discuss. Opportunity comes when a distant aunt offers to educate her as a lady in London. Exposed to fashionable society and romance–as well as clues about her mother–Lilly is torn when she is summoned back to her ailing father’s bedside. Women are forbidden to work as apothecaries, so to save the family legacy, Lilly will have to make it appear as if her father is still making all the diagnoses and decisions. But the suspicious eyes of a scholarly physician and a competing apothecary are upon her. As they vie for village prominence, three men also vie for Lilly’s heart.

The first thing that comes to mind when I think of this book is wow. The imagery set forth is beautiful and the prose is profound. Julie Klassen weaves a story of emotion, and beauty. Of a young woman just trying to find her way in the world. When we first come upon Lillian Haswell (Lilly) she is a daughter who wishes to do what most daughters do at some time in their life, flee home. But as the daughter of an Apothecary she isn’t sure how she will be able to do so. Enter the brother of her long missing mother Rosamond.

Lilly is given the chance to go to London and experience a season by her aunt and uncle. They will sponsor her and dress her, and al of the other wonderful things of a fine lady in London. The offer she was waiting for! Lilly takes it and spends two happy years in London, she is flirted with, courted and almost makes several matches. Until that is of course the men find out what her father does. At the end of two years however Lilly is called home to tend to her ill father.

We find a great many up’s and downs in the story of Lillian and her family. Her father Charles is a kind hearted man with some secrets in his passed, who is ailing and desperately trying to be well enough so he can continue the business. Her brother Charlie is such a loveable character, he is a bit simple, but loving and he tries hard. He finds his love in gardening.

While the story has many tender moments that will make you cry I also enjoy some of the funnier. Lily has so many suitors she doesn’t know what to do with them. Roger Bromley from London, the next baronet of her town, Roderick Marlow, Mr. Shuttelsworth, Dr.Graves and her father’s old apprentice Francis Baylor OH MY! You will not be left bored when reading this book. If you’re a woman you will feel Lilly’s plight, living in a world where she knows the knowledge, enjoys the work and is good at it. But because she is a woman she is not allowed to practice openly. Because she is a woman she is supposed to rely on men, but they are all leaning on her!

The Apothecary’s daughter is a coming of age story. You will follow the stories of everyone in the book, but mostly you stay with Lillian. She has heart ache, and confusion and happy moments too. This is a real story, and it sucks you in. You care about the characters, you love them. You begin to wish Lilly could go back to London, or should she stay home? You never know which would be better, not until the very end.

One thought on “Book Review: The Apothecary’s Daughter by Julie Klassen”