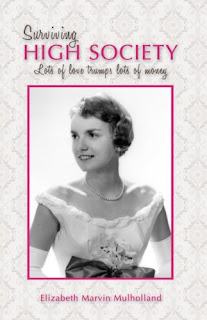 To the outside world, Elizabeth Marvin Mulholland had it all. Adopted into a wealthy New England family, the young Elizabeth was afforded the luxury many people only realize in their dreams. She joined her family on lavish European vacations, lived in a finely decorated home, grew up in a world heavily infiltrated by power and money, and hob-knobbed with celebrities. As a close friend of Katherine Hepburn’s niece, she gained an inside look into Katherine Hepburn’s guarded inner life, which she details in Surviving High Society.
Her real life, however, was not the fantasy it seemed to others. Elizabeth grew up in a volatile household. Her adopted brother attempted to murder her mother and remained estranged in the decades to follow. Her father, who was her strongest ally, died suddenly when she was twenty-two. And, until her death, Elizabeth’s mother used all means possible to exert control over her life. Her mother bounced Elizabeth in and out of psychiatric facilities and used her wealth to persuade doctors to keep Elizabeth locked up and medicated. Throughout, Elizabeth struggled to keep the pieces of her life together.

After her mother disinherits Elizabeth, she successfully seeks to find freedom and a life of her own away from her mother s ever-watchful gaze. Her life becomes a life without fantastic riches, filled with its own obstacles and triumphs. But it is now her life.

I do not usually read memoirs; it’s not a genre I dabble in very often. But when I saw this book come across my review choices it got my interest so I requested it. And I have to say I was not disappointed. The book is a fast read, and an interesting look into a young woman’s life.

How she finds herself to be under the thumb of a vengeful parent, and has to climb her way out. Giving up the so called silver spoon that has been hers for her life to find her own way. That is something that not a lot of us would do I suppose. But Elizabeth found a way, and while her life was forever altered it can’t be said that it was a bad way.

I feel the only thing missing from this book was a level of anger that must have been felt. If my mother treated me the way Elizabeth’s treated her I would have been bubbling over with anger. Perhaps it just show that she is a bigger woman than myself. But over the entire book is a good one, and if you enjoy memoirs you will enjoy it.