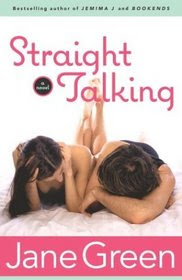 Meet Tasha?single and still searching. A producer for Britain?s most popular morning show working under a nightmare boss, Tash is well-versed in the trials and tribulations of twenty-first century dating. She and her three best friends certainly haven?t lived the fairy tale they thought they would: there?s Andy, who?s hooked on passion, but too … more »much of a tomboy to have moved much beyond the beer-drinking contest stage; Mel, stuck in a steady but loveless relationship; and Emma, endlessly waiting for her other half to propose. Their love lives are only complicated by the sort of men who seem to drift in and out: Andrew?suave, good-looking and head over heels in love . . . with himself; Simon, who is allergic to commitment but has a bad-boy nature that?s impossible to resist; and Adam?perfectly attractive, but too sweet to be sexy.

The bestselling first novel that launched Jane Green, one of the brightest stars in contemporary women?s fiction, Straight Talking sets the record straight regarding the real world of dating, and follows the adventures of Tash and her friends as they search for fulfillment and the right kind of love. Funny, flirty, and ultimately tender, Straight Talking gets at the heart of modern romance

Jane Green is one of the wittiest authors I know of. Maybe it is just because I latch onto British humor more than I do my homelands but what can I say I really do enjoy her writing style. Straight talking follows the life of Tasha a producer in television who is no different than the rest of us. She has had her ups and downs, had a man break her heart, dated and dated again. Waited by the phone that never rings, who hasn’t done that a time or two?

This book is as with the others fantastically written and very cheeky. While I admit I could see the writing on the wall with Adam well before the big reveal, I think it was set up so we could see it that way. She wanted us as the reader to see what Tasha couldn’t, and still couldn’t until she lost what she had. Straight talking attacks the age old adage you don’t know what you got till it’s gone. I won’t tell you what happens because that of course would ruin the book, but I recommend this one to read. If you like chic lit you will like this book, if your new to chic lit I still think you will like this book.